Was 100 years: Legendary mercenary is dead

last week the death of the former mercenary 'Mad' Mike Hoare in a nursing home in south Africa, writes a number of foreign media, among other things, Soldier 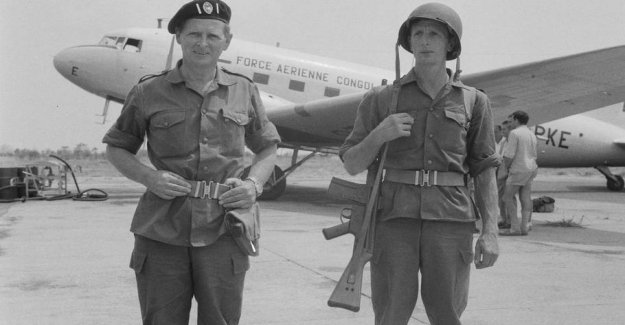 last week the death of the former mercenary 'Mad' Mike Hoare in a nursing home in south Africa, writes a number of foreign media, among other things, Soldier of Fortune - a magazine for professional soldiers.

Hoares son has confirmed that his father is dead. He was in fact 100 years - which in itself is remarkable seen in the light of the life he led.

- Mike Hoare lived by a philosophy that you get more out of life if you live it dangerous, has a son, Chris Hoare stated in connection with the death of his father.

'Mad' Mike was the most famous of the long succession of mainly white mercenaries who fought in post-colonial Africa in the 1950s and 1960s, but his career ended with a defeat when he ended up in prison in connection with the hijacking of a plane after a failed coup on the island group of the Seychelles.

He was born of irish parents in the irish national holiday, Saint patrick's Day in 1919 in Calcutta.

He was sent to England to go to school.

Shortly before 2. World war ii broke out, he had volunteered for the british army, where he fought against the japanese in India. He ended the war with the rank of major.

After the war he moved to south Africa where he got the base until his death 2. February of this year. Here he served a living by, among other things, to organize safari tours.

In the early 1960s he was introduced to congoleseren Moise Tsombe, who wanted to take power in the Congo, who some years earlier had achieved independence after many years as a belgian colony.

Hoare and his mercenaries in the Congo, along with the white refugees. Photo: Priya Ramrakha
Tsombe hired Hoare twice in the 1960s to quell various uprisings. The first time, when Katanga province was trying to achieve autonomy, and the second time in connection with a rebellion supported by the then communist eastern bloc, called the Simba rebellion.

Both times led Hoare an army of mainly european mercenaries, and both times it was the rebellion quelled.

In 1978, he served as an advisor on the film 'The Wild Geese about mercenaries on an expedition in Africa. In the cast featured among others, Roger Moore and Richard Burton.

In 1981 he was in charge of a coup attempt directed against the socialist regime in the Seychelles. According to several foreign media came the coup attempt, with the agreement of both Kenya and south Africa.

Then, there was a commotion at the airport, and in the context hijacked Hoare and his people an Air India aircraft that flew the group back to south Africa.

the Year after came Mike Hoare to court where he was sentenced to 20 years in prison. It was the ten contingent. He was released after a little less than two years of sentence.

The last years of his life he used to write books about his life and deeds.