Viral-bomb in Sweden: the 88-year-old homeless Rolf lived in his car

- Rolf Hansson in Trelleborg is almost 90 years old and lives around the clock in his car. He has worked and paid taxes throughout his adult life, but the risk 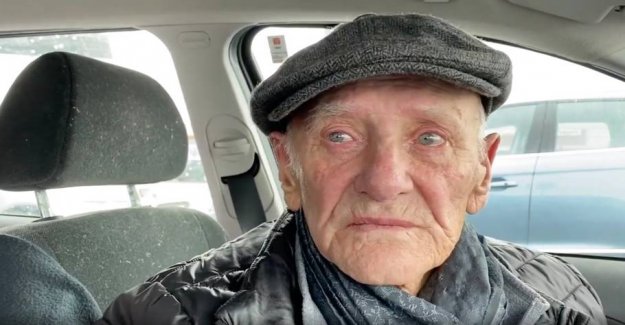 - Rolf Hansson in Trelleborg is almost 90 years old and lives around the clock in his car. He has worked and paid taxes throughout his adult life, but the risk now to come to live his last days as a homeless person in Sweden, because the municipality refuses to help him with a home, or a place in a nursing home, writes the Swedish freelance journalist Joakim Lamotte and adds:

- See report and video and share it as much as you can. Together we can put pressure on those responsible, so Rolf release to live his final years in a car park in Trelleborg.

It was a freelance journalist Joakim Lamotte for two days ago on his Facebook. He was also a video-reportage on homeless Rolf out on his Facebook page, where it has been shared throughout the 36 a thousand times and has got 25.000 likes and 8,2 thousand comments. A true viral hit that has swept across Sweden in the last few days. The video has had nearly two million views.

In the video says Rolf with tears in her eyes, Must it really end like this?

Several Swedish media has also written the story, including the News Today

the Day after the reacted local politicians from Sverigedemokraterna and drove around in Trelleborg to look after the 88-year-old Rolf. They found the homeless man, and Sverigedemokraterna offered to pay for a hotel room and food for him, until the municipality gets the problem solved. Rolf thanked, of course, immediately yes. And now he is sleeping in a hotel room and have got the smile back.

Rolf is seen here at his new hotel room in Trelleborg, which is paid by the party Sverigedemokraterna. Photo: Joakim Lamotte.

yesterday reacted Trellebrog Municipality on the much talked about case on social media. In a video on the Trelleborg Municipality's website says kommunaldirektør Fredrik Geijer following

- We have now met the man, and we have offered him the opportunities for housing, as our municipality can offer him. But unfortunately, he has refused. Thus is our responsibility ceased. But we are of course open to welcome him back, if he comes forward that he would still accept our offer, says kommunaldirekøtr Fredrik Geijer. It also appears that the municipality does not specifically say about the housing they have offered the 88-year-old Rolf.

On Facebook tells freelance journalist Joakim Lamotte, however, the following about the new developments in the English case:

- I have received information that the social service in Trelleborg would place him in a home where there live addicts and criminals. It is a place, as Rolf have previously visited, and he is afraid of the people who live there. My sources at the police in Trelleborg tells me that it is absurd that social service will put Rolf in such a place, says Joakim Lamotte, who is happy that Rolf now has been offered a hotel room:

- It is wonderful to know that Rolf now has a roof over his head and gets to sit and sleep in his car on the night. Moreover, a number of dentists have contacted me and offered him free help for his tandprotese, so he better him chewing the food as he eats, sounds from Joakim Lamotte.

Rolf is sitting here in his car with a blanket over themselves to keep warm in the winter cold. Photo: Joakim Lamotte.

the Extra Leaf has also contacted Joakim Lamotte to hear, why exactly is this story about Rolf has gained so much attention in Sweden:

- It's all about, that we live in a Sweden that fail the older people who have paid taxes all his life. Today we have a hospital service that is completely in the knees, and the many pensioners living below the subsistence level. All elder care works not at all. When I was doing it here reportage about Rolf, he was suddenly a symbol for many of the problems that you see in Sweden. This has meant that many swedes are upset about how you have dealt with Rolf, says Lamotte to Ekstra Bladet.

Here is the English old car, as he has lived in because he was homeless. Photo: Joakim Lamotte.