Valentí Oviedo: The Liceu in need of a change of direction 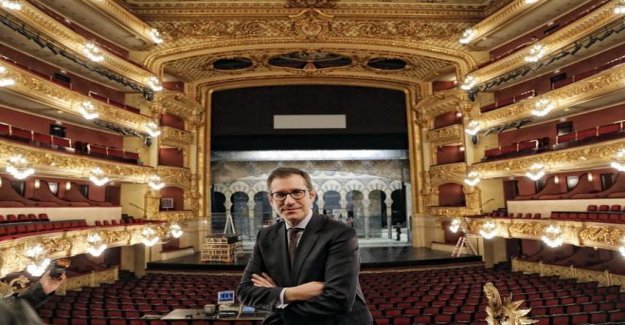 The new director-general of the coliseum lyrical barcelona recognizes that the theater needed "a change of direction" to "go back to being the icon that he was." Your goal: 50 million budget to achieve it

In 2013 he landed in the management of the Auditori of Barcelona, where he made with a solid experience in budget control of a cultural institution. And with the fame of encourage proposals with a stimulating and innovative. After two years in the management of the Icub, since last spring Valentí Oviedo (Spain, 1977)has in their hands the general management of the Gran Teatre del Liceu. And if his predecessor he had to revive economically the institution, he plays to get the Liceu "return to being the icon that never should cease to be". That is, to recover the illusion, creativity, audience and international prestige.

After six months on the job, what is your assessment of the institution?From the internal point of view, I see a theater with a very positive attitude, with a team that wants to the institution and want to work for it. And this, without doubt, help develop a project that after these past five years you need a change of direction: the theatre has to find its identity and the soul that has had throughout its history. What makes it necessary for this change of direction and where you want to go?Well, in 175 years of history, every institution goes through moments of more or less decisive. We come from five years of economic situation horrific that it has been saved with a note on the part of the person who has been the front. And I know how difficult it is to achieve this. Now, where are we going? I think to answer this is to see what you have done big to this theatre, the time of our great divos, Caballé, Carreras, and that more recent period, in the that was bet by La Fura dels Baus, by Bieito.... All of this has done great to this house and now we have to find again the local values to seeking to be international. We don't have the budget of Paris or London, but we do have to know what we are unique and we differ. Why it has not renewed the contract of the artistic director, Christina Scheppelman?Cristina has been a very important value during these years, but all projects have a period and generate new illusions supposed to sometimes change the faces that are on the front. In the case of Cristina might have been a year, but taking into account that the period of the operas are so long, we decided to advance the announcement of a new artistic direction for the changes to come in season 22. What is the profile now has in mind for the person who will lead this change? It is essential that you have a great desire to work in a team. You also have to connect with the values of the city, to understand the viewer and to understand how ambitious it is Barcelona, and how that ambition can be projected to the international level. And to do this, you have to have a very good international agenda, but we don't want someone whose project you can do so here as well as in Japan, or in New York. This has to be a unique project and look at the roots of here to design the theater at the international level. Many today see the Liceu theatre as a theatre "apathetic, sad and half empty". What do you intend to do about it?We want to take advantage of the season 2019-20, which will be the 20th anniversary, to re-connect with the citizenry. We want people to re-engage this project. We want the people we want, which will allow in future seasons we can risk a little more and give out a repertoire that will astonish. We also have to continue to build projects such as the Verdi Requiem in the Cathedral or the Liceu Under 35, with two thousand young people freaking out with the opera, and that show that will be close to the people, to excite with ambitious projects. But all this has to be accompanied by proposals which go in the same direction. For this reason the new artistic director has to have that attitude today. And when I say this I am not referring only to program Glass, Grape or Benjamin. It also means how we face the Madame Butterfly and Tosca also have to be present in the theatre. In this project, does the music director Josep Pons has the full support of the general direction?With the master Pons we work together and we are in a great harmony. He is aware of the budget situation there is, so we are considering a realistic scenario to make things and be able to move forward in the direction you want. We work with the cuepos stable, but we also want the big batons return to the Liceu.

'Black Friday' also to the opera

With less distress, economic that the which seized Roger Guasch, Valentí Oviedo is confident that the Liceu will have the resources necessary to carry out its project renewal. "Now we have a budget of 47.3 million euros and I think that in order to develop the project you desire we should be in the 50 million, revenue that should come by way of generated by box office and patronage, Fortunately, the account of Event of Special Cultural Interest until 2020 helps us to find new patrons," explains Oviedo, who also points to changes in the lockers. "In some cases we will have to reduce the tickets, because if not who is going to come in here? On this Black Friday we decided that people could come to L italiana in Algeri with a 50% discount and we sold 600 tickets. The issue is not only the artistic proposals, but how it relates to the Liceu with the society", he concludes.