At Wednesday's press conference revealed Doug Ryder, who now has sold a third of his team to the Virtu Cycling Group, that the first conversations about the co 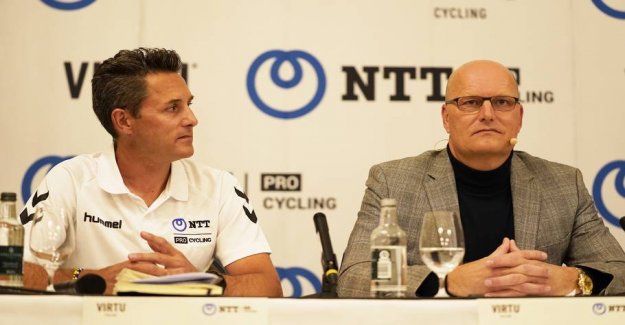 At Wednesday's press conference revealed Doug Ryder, who now has sold a third of his team to the Virtu Cycling Group, that the first conversations about the cooperation with Riis took place way back in 2015.

What he did not do a large number of is that the team, now called the NTT Pro Cycling, rejected a cooperation with Riis at the time, because ‘the team's values are not compatible’ with Riis’ dopingfortid.

Now insists on Ryder, that it was the timing that was not really at the time.

It is not so much with the values to make, said Ryder to the Extra Blade.

- The then teammanager was as quoted, that it was precisely værdiforskelle, which was the reason for the rejection?

- From my perspective, it was the timing that was not correct. We were heading into an era in which we were World Tour team, and there was not hehov for Bjarne at the time. It was the timing, it was mad with at the time, said Ryder.

- Our conversations began already then, and we have kept in touch since. And now is the timing so perfect.

- What do you think about the critical voices when it comes to Riis's comeback?

- All that was many years ago. Bjarne has an incredible passion, and the riders are super-excited about having to work together with a person with such an experience, said Ryder.

- He has made mistakes and has learned from them. We can live with it. The spirit of this partnership is that we must inspire and create hope for hundreds of thousands of young people in Africa, said Ryder with the idea of the charity Qhubeka, which is closely linked to the cycling team.

Qhubeka provide bikes for africans in poor areas, and creates in the way of mobility and growth.

- We are all learning from our mistakes, and this is an immensely important step in the team's history, said Ryder.