Threw lykkemønter into the aircraft

A 28-year-old man from southeast China has received a fine of 120,000 yuan (115.992 dollars) in damage costs to the airline Lucky Air, because he threw coins in 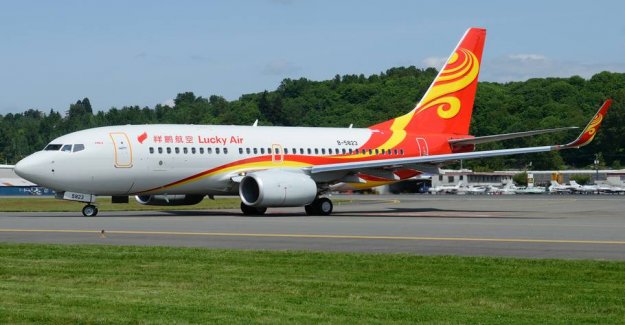 A 28-year-old man from southeast China has received a fine of 120,000 yuan (115.992 dollars) in damage costs to the airline Lucky Air, because he threw coins into an aircraft engine, in the hope of good luck on his journey.

the Court of Anqing in Anhui province, handed down the fine in July, but have only published it now. It writes the South China Morning Post.

Lu Chao, who was on his way to his first flight, admitted that he threw the coins on the plane to get happiness and luck, as he boardede 17. February 2017.

All the passengers had to deplane from the aircraft while it underwent a security check. The plane - from Anqing to Kunming in Yunnan province - was cancelled, as the flight crew found two coins on the ground at the side of the aircraft engine.

Lucky Air had to arrange accommodation for stranded guests and rebook them to the other aircraft after the incident, which the airline estimates has cost them more than 123.000 yuan (118.892 crowns).

Lu Chao was taken away by the police and ended up being detained for 10 days with a charge of disturbing the public peace.

Lucky Air filed a lawsuit against Lu Chao in may, where they wanted compensation for their losses. Lu Chao, who was represented by his brother in court, argued that the airline should have made an announcement before boarding, which would remind passengers that they should not throw the coins on the plane. It was however, the court did not agree, and they gave Lucky Air right in the case.

Popular to throw coins
It is not the first time that the airlines in China are finding that their passengers throw coins after the planes.

A man threw coins after a motor as he was boarding a plane from Wuhan to Shenyang in July 2017. He was also sued by the airline Shenzhen Airlines. The parties entered into a settlement, where the man should pay 50,000 yuan (48.330 crowns). You can also find numerous examples of that, especially the older chinese throwing coins on the planes.

the Airport Sanya Phoenix International Airport on the tropical island of Hainan felt this summer had to put up signs where they warn the passengers that they should not throw coins on the planes. However, they have later taken the signs down, according to the South China Morning Post.

It can cause major damage to throw metal objects into an aircraft engine.