The mayor mugged: Doused with paint

Angry protesters set Wednesday fire to the town hall in the small bolivian town of Vinto. It was done in protest over country's president, Evo Morales, who is 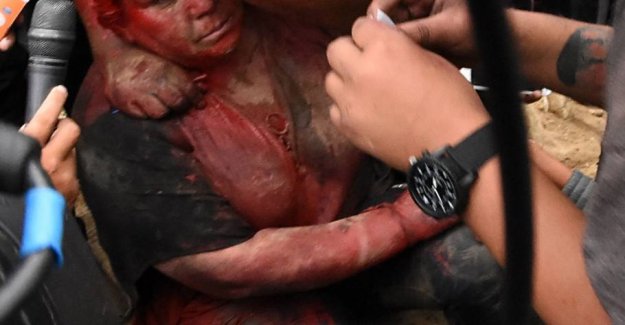 Angry protesters set Wednesday fire to the town hall in the small bolivian town of Vinto. It was done in protest over country's president, Evo Morales, who is suspected of valgsnyd.

But the demonstrators did not stop there.

instead, they broke the check at the town hall, and dragged the city's female mayor, Patricia Arce, through the city, where they overdyngede her with red paint and trimmed the hair of her.

the Mayor is accused of knowingly påkørt a group of opposition supporters, who had blocked a road. Several persons were injured and a 20-year-old student killed during the impact.

Patricia Arce was surrounded by media reporters after her assailants had loosened his grip on her. Photo: Ritzau Scanpix

The typing of several foreign media, including the BBC.

When the perpetrators were to let go of the mayor, rushed journalists to the site.

- the Truth is on my side, and I'm not afraid to say the truth. I'm in a free country, and I will not be silenced. If you want me dead, so kill me. I will pay with the life of the movement for change, said Patrica Arce subsequently, according to the news agency AP.

Then escorted the police to her to the nearest hospital.

There is a great unrest in the south american country, after Evo Morales was declared winner of the presidential elections 20. October. Thus he secured his fourth term as the country's leader.

the Opposition has accused the government of electoral fraud and has refused to recognise the result.

at Least three people have lost their lives in the violent clashes in Bolivia, writes the BBC.