The disaster from the inside: If Denmark was hit

A telemast tumble over a set of railway tracks at the same moment the train where. the Mast smashes down in the train, which is loaded with dangerous chemical 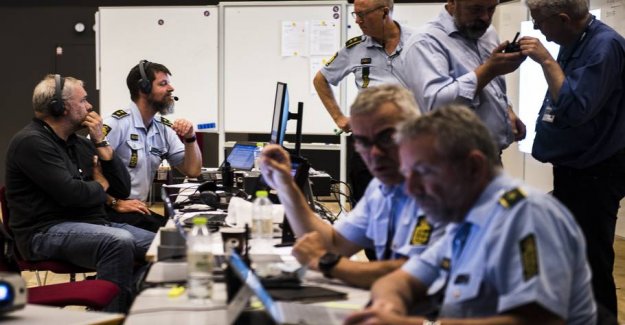 A telemast tumble over a set of railway tracks at the same moment the train where.

the Mast smashes down in the train, which is loaded with dangerous chemicals. A moment after pouring it out with propane and klorgas. A disaster is brewing. But, thankfully, not in reality

The chemical leak, is a fictional disaster, which is the starting point for the national crisis management exercise, KRISØV 2019.

the Exercise is held every two years, and have previously focused on, among other counter - terrorism and cyber-attacks.

But this year it is a massive chemical leak at Snoghøj a little south of Fredericia, which will test the authorities ' ability to function and cooperate when it really counts.

In Jonstruplejren at Ballerup, which is a former training site for the Air force, is in the region of 120 people in connection with today's exercise.

nationwide participant up to 1500 persons.

KRISØV is a recurring crisis management exercise every other year practice key actors ' ability to maintain and continue essential functions in a situation where these functions are threatened, weakened, disrupted or destroyed.

the Exercise will form the basis for strengthening the performance of core operations in crisis management, including to test about the role and responsibilities, plans, procedures and relationships are working as intended.

KRISØV 2019 planned by the congolese national Police, as well as representatives from the participating authorities and organisations, and the activity conducted under the auspices of the Kriseberedskabsgruppen.

And there are representatives from all imaginable nooks and crannies of the state. Ministries, government agencies, intelligence agencies and even foreign embassies involved, to make it all so true to life as possible.

- We have a 'borgercelle,' which is made up of a group of students. The player concerned citizens who are calling in to get information during the disaster. In addition, we have a fictitious media center, which also consists of students. They are calling continuously to the various press offices and write articles about the accident.

- We try to put all the parts of preparedness under a pressure, which is similar to it, they would be exposed to in a crisis situation, says øvelseschef from the agency, Ulrik Keller.

He explains, furthermore, that the current seems more 'problems' develop in the course of the day, in order to maintain a certain amount of pressure on the participating in the exercise.

While the drama unfolds in the fictional reality, as is the mood of Jonstruplejren this morning quite relaxed.

The officers in the 'tactical cells' to coordinate seeds, and a single representative from the Defense, is in uniform. The same is a part of the people from the agency.

Otherwise, are all dressed in civilian and waging their battle to avoid katastofen from a laptop in a makeshift decorated offices. Desks covered with extension cords, writing materials and water bottles.

Today's exercise is mainly about communication. To get all devices to work together.

this is Why everything from the government's committee to the local emergency preparedness in southern Jutland with today. All must know their place and the proper chain of command in case of an accident.

In one of the offices sitting Allan Glue, which is funktionsleder in the Region of southern denmark at AMK control center. Today is his task roughly in to keep track of how many ambulances and helicopters that are available and how they should be used.

- When we send our personnel to a disaster like that here, so I shall among other things ensure that there are still devices, which can take care of the other citizens. Right now I have among other things been pulled using in from Germany, he explains, pointing to a map that shows the various entities ' rankings.

At the 'tactical cells' sitting inspector Michael Kristiansen, who works as today's second øvelseschef. He has been involved in all the planning and will primarily observe.

Michael Kristiansen holding the leash in the police action during the KRIØV 2019. Photo: Jonas Olufson

- I am responsible for the conduct, together with Ulrik, so I'm keeping of course an eye on what happens in the course of the day. But all the people here are so talented and are used to working independently.

- So today leans me back and looking at the other work, he laughs.

But despite the relaxed atmosphere so is Michael Kristiansen and all the other participants in the highest state of preparedness in the day.

And judging from Ekstra visit in Jonstruplejren this morning, so Denmark is in quite good hands, if the disaster were to occur in the real world.

the agency to choose for each exercise a different scenario, as the participants must relate to.

KRISØV 2019 took place under the banner of 'Chemical incident.'

In 2017 took place the drill within the scenario 'Terror in Denmark, and in 2015, the starting point was a 'Nuclear accident.'