The amazon is burning: Nasa photo reveals the scale

It is not only the Amazon rainforest, in Brazil, that burns. Large areas of rainforest in the neighbouring countries of Bolivia, Peru, Paraguay, Ecuador, Urugua 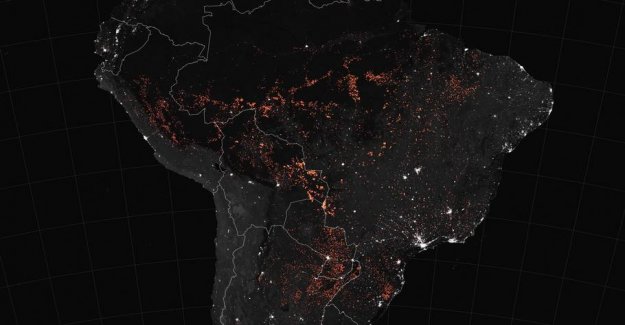 It is not only the Amazon rainforest, in Brazil, that burns. Large areas of rainforest in the neighbouring countries of Bolivia, Peru, Paraguay, Ecuador, Uruguay and Argentina are also in flames.

Satellites are often the first to detect fires in remote parts of the Amazon, says Nasa researcher Douglas Morton.

Nasa-the researcher confirms that in 2019 registered several fires in the world's largest rainforest than at any time since 2010.

Experts say that the increased deforestation in the dry period, where large areas are being cleared to make space for crops or grazing - has exacerbated the problem this year.

In the weekend inmates Brazil two Hercules military aircraft in the fight against the severe forest fires. The planes have thrown thousands of gallons of water crashing over the forest in an attempt to fight the flames.

Dozens of firefighters have travelled to the region to extinguish fires.

Justice minister Sergio Moro has also given permission for the security forces to be inserted to help stop the illegal deforestation.

the president of Brazil, Jair Bolsonaro, has been under international pressure to do something about the forest fires, which he at first suggested that the ngos had attached as revenge for the fact that he has cut back on grants to them.

The record number of fires in the Amazon has been one of the themes of the G7 leaders ' summit in France at the weekend.

Here you are close to an agreement on how you can help stop the deforestation of the Amazon and restore some of the devastation.

the president of France, Emmanuel Macron, says, that the help includes both technical support and financial contribution, 'so that we can help them most effectively'.

the Amazon is considered to be essential as a counterweight to climate change, since it absorbs a lot of CO2.