Stars in the wild an accident, Slammed into the elk 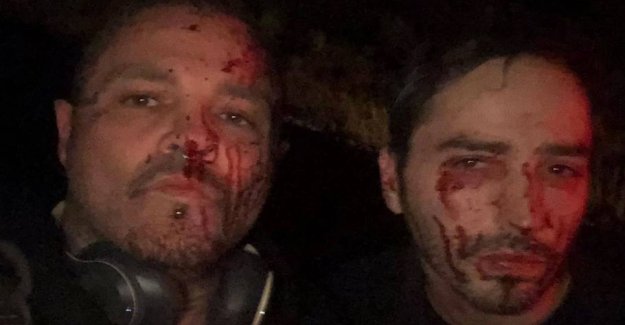 we turn the clock back to the turn of the millennium was the band Crazy Town on everyone's lips as the with the song 'Butterfly' was number one in the charts in everything from Brazil and the UNITED states to Denmark and the Uk.

they managed never to follow up on the success of the same degree, but the band is still active - despite numerous personnel changes along the way.

on the Night of Thursday, drove the band with frontman Seth Binzer, guitarist Elias Tannous and drummer Roland Banks in their tourbus on Route 17 in Ontario, Canada, where near was gone totally, totally wrong, when they ran into a she-moose and totalskadede their car.

With blood running down from the head, they were wearing the ruff of the ambulanceredderne.

'just came out from the emergency room, and with the help of God we are all okay and escape with minor scrapes. We hit a moose on Route 17 in Ontario, Canada, last night. Still plan to complete the tour', writes the band on Instagram.

Here they have put the violent images from the accident out, which can be seen below:

Just got out of the emergency room, by the grace of god we are all ok just cuts and bruises. We hit a moose on route 17 in Ontario, Canada last night .. still planning to finish the tour #Sudbury tonight #CrazyTownXFamily

the Front of the car was totaltskadet in a collision, and it may almost be considered a miracle that it didn't go more wrong than it did for the band members.

She-the moose died in the collision, and such situations are apparently not unfamiliar in the area. The band says to TMZ that the driver of the bjærgningskøretøjet told that it was the fifth incident, as he was out on Route 17 only in October.