My complaint to the Fda requesting permission to store them in quarantine were refused. - Unfortunately. - We got the letter from nævningenes house Friday t 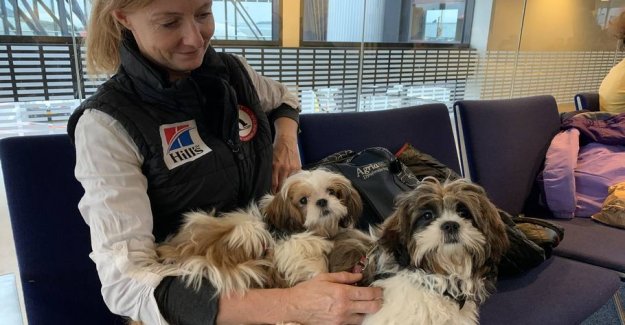 My complaint to the Fda requesting permission to store them in quarantine were refused.

- We got the letter from nævningenes house Friday the 22/11 and FVST gave us on Saturday 23/11 message that the killing of the puppies was to be completed on Monday, 25/11 at 12.

- Unless the return to Serbia was initiated.

so begins Rikke Christensen-Lee, director and veterinarian in Dyreværnet an email to the nation! on the in her and many hundeelskeres eyes completely unfair and harsh manner, the Danish authorities have dealt with the two small tsisu-puppies Daisy and Alba.

The two were - as you may remember from the article 'Came illegally from Serbia: they are threatened with the killing' - discovered when they were attempted smuggled into Denmark. And although several thousand danes (including 13667 readers here on the site) felt that there was a place for them in Denmark, so kept the authorities so stuck in that they constituted a risk. You can see the decision below - Rikke mail continues as follows:

- Therefore we applied immediately on Monday. 25!11 on FB after a family in Serbia, and for all the luck we managed!

- We bought therefore the earliest tickets for direct flights we could find, and now look forward to a happy ending for the two girls (which, despite my hardened dyrlægehjerte just gone in from me...).

- I fly now even down with them and check that the family is the correct one.

- I have also sterilized the puppies.

- one thing is certain - they will not more through, write Rikke, who sent the pictures from the airport.

Came by bus from Serbia

- Dyreværnet receive 25. september 2019, Daisy and Alba, two ten-week-old shih tzu-puppies, which were seized by the new dyrepoliti (Special unit for animal welfare in the East).

- the Puppies have come to Denmark by bus from Serbia and has no rabies vaccination.

- At Dyreværnet are placed in quarantine. The puppies seem healthy - and thrive in the best of health.

- the Police entrusts the Friday 25. October the puppies to Dyreværnet.

- Tuesday, 29. October requires the Fda the two puppies returned to an uncertain future in Serbia on Dyreværnets bill or killed. Dyreværnet find none of these options acceptable.

- Thursday, 31. October will be Dyreværnet reported to the police by the Danish veterinary and food administration.