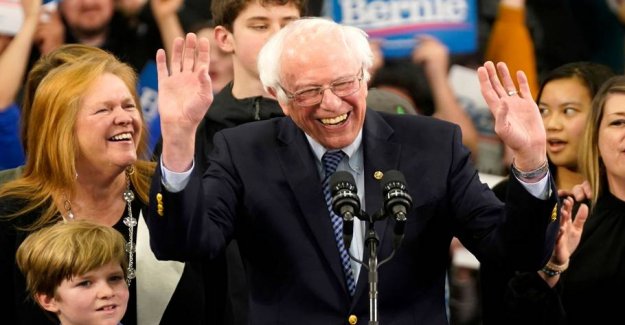 With almost all of the polling stations tallied after Tuesday's primaries in New Hampshire are senator Bernie Sanders declared the winner of several american tv-stations.

the 78-year-old Sanders gets 26 percent of the votes, while the former mayor of South Bend, Indiana Pete Buttigieg will 24,3 percent, and senator Amy Klobuchar 19.9 percent.

- Let me take this opportunity to thank everyone in New Hampshire for a great victory tonight, says Bernie Sanders to cheering supporters, after both NBC and ABC have declared him as the winner.

- This victory is the beginning of the end for Donald Trump, he adds.

Former vice president Joe Biden is relegated to a fifth place finish with around 8.5 per cent backing of senator Elizabeth Warren, which is located on about 9.4 percent.

Ahead of Tuesday's primaries in New Hampshire was Joe Biden predicted a bad choice according to the polls after a disappointing result in Iowa.

Bernie Sanders belongs to the more left-wing part of the Democrats, while Pete Buttigieg representing the moderate.

In Iowa secured Buttigieg out a narrow victory on 0,1 percentage points in front of Sanders. Both have demanded a partial recount of the votes.

on the Night of Wednesday local time notify the businessman Andrew Yang according to CNN, that he withdraws from the battle to become the Democratic presidential nominee.

The 45-year-old entrepreneur asked up to nomineringsræset, although he has no political experience.

He surprised many observers by qualifying for the debates and be in the race longer than several political veterans.

the 55-year-old senator from Colorado Michael Bennet informs on the night of Wednesday local time, that he withdraws from the race.

To his supporters in New Hampshire says Bennet, that it is an 'appropriate' time to set the fight.