A majority of political parties are tired of that Mette Frederiksen (S) will not show up in a consultation on the government's recruitment of pressechefer. i 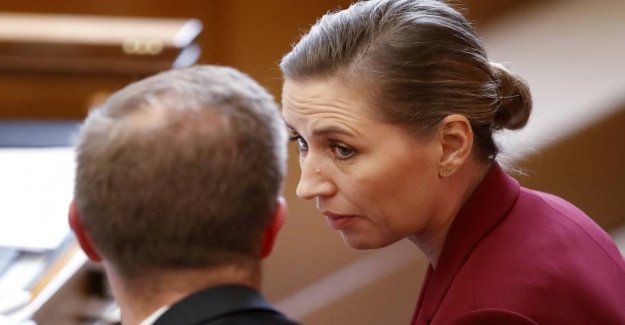 A majority of political parties are tired of that Mette Frederiksen (S) will not show up in a consultation on the government's recruitment of pressechefer.

in a majority In the Parliamentary Committee on Rules of procedure are dissatisfied with the fact that the prime minister does not intend to explain why six out of the eight recruitments of pressechefer in government departments since the election have gone to candidates that either are true socialists or close to the minister, they are going to work under.

the Majority consists of the civil parties as well as the Alternative and the radical.

to Ekstra Bladet says a member of the Committee on the Rules of procedure Sophie Løhde (V), to Mette Frederiksen setting is not satisfactory.

- It is deeply problematic that the ms Mette Frederiksen does not have the courage to defend and explain the socialist cronyism, which unfold in the usually politically neutral civil service, she says.

- When Mette Frederiksen won't be meeting up in a consultation, which of course is her responsibility in relation to the government's socialdemokratisering of the neutral civil service, then it must be because there is nothing to come after.

- I assume that the prime minister listens to the criticism, pronounced by a majority in Parliament, and meetings, up to the conciliation, says Løhde.

- If the Parliament will have a minister to explain something, then there is only one thing to do. It is that the minister must stand up and explain it.

we have fortunately today, we got a majority to say to the prime minister, says Skaarup.

- It is not an unimportant question, that one is by americanising our entire embedsapparat to get people in who have partibogen in order. It is cronyism of the open carpet, continue the DF'eren.

the Extra Leaf is working to get a comment from Mette Frederiksen.