the Progressives (FrP) goes out of the Norwegian government, informs Siv Jensen during a press conference at the party office on Monday ettermiddag. the Messa 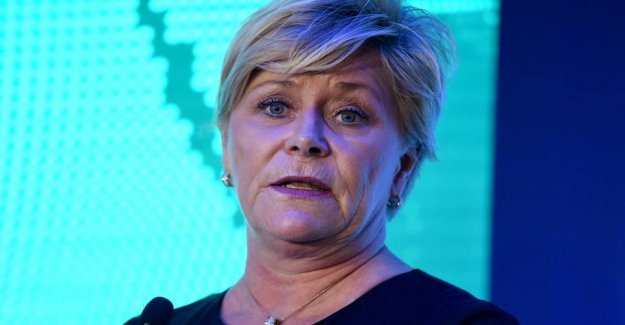 the Progressives (FrP) goes out of the Norwegian government, informs Siv Jensen during a press conference at the party office on Monday ettermiddag.

the Message comes after an extraordinary landsstyremøde with the party on Monday.

It writes the VG.

I took the FrP in the government, now I am taking the FrP out again. I do it because it is the only right thing to do. We will delete and right is not implemented enough of the FrP's policy, that it is worth incurring more losses, said the party's leader, Siv Jensen, at a press conference.

- There is overall no longer a basis for the FrP continues in the government. Therefore, I have today announced the prime minister that there is no basis to put forward a list of requirements above either. We have also recorded the signals from the other parties about the willingness to get the FrP in the meeting, she added.

FrP point, however, remains at Erna Solberg, as prime minister, despite the exit.

- We have no desire to change the prime minister. We believe that Solberg is the right person to lead the country, and in the time that comes.


the Problems between the indvandrerkritiske FrP and the rest of the government arose when it emerged that the government had decided to download a terrorsigtet woman who has fought for the ICE, and her two minor children back to Norway from Syria, where they had been sitting in the notorious Al-Hol camp.

It was, supposedly, to the five-year-old son was seriously ill and just weighed 12 kilo in august.

14. January the family was brought to Norway, according to Aftenposten.

See also: 371 children have died in the notorious camp

The 29-year-old woman, who is Norwegian-pakistani, is charged with having participated in a terrorist organization. Although she claims that she did not travel voluntarily to Syria, but was forced by her former husband.

FrP has all the way in the process stressed that they only wanted, that the son - not the mother - had to be imported to Norway.

Erna Solberg explained at a press conference that she respects the fact that the FrP has a different view in the matter:

- It has not been my intention to characterize others ' ethics and morals, but it was really for me and the Right to bring the boy home. I have respect for the fact that FrP step out of the government, although I had wished they had been.