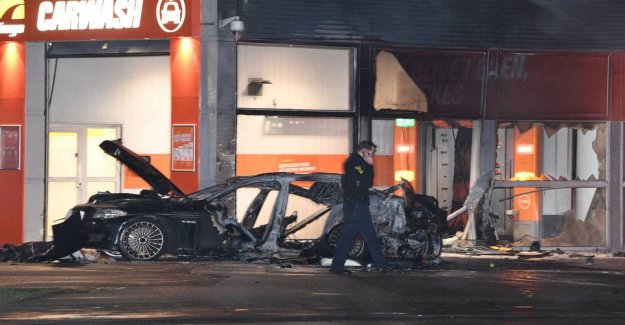 It was a stolen muskelbil, a BMW Alpina with 500 horsepower that early Sunday morning, drove wrong on Ingo gas station in Vasbygade, and burned out.

It happened during a police chase where the BMW tried to run from the police.

the Driver lost control of the vehicle, the first påkørte a light pole and tore the power lines down. Then hit the a stand on Ingo tank and the wash-bay, before it caught fire. The smoke from the fire spread to the wash-bay.

Two people were seen running from the car, but police found one more easily injured in the area by Otto Busses Vej, copenhagen., where the Capital's Preparedness had sent a drone into the air to look after the injured from the car.

the Man was taken to the treatment at Hvidovre Hospital under the escort of the police, but he is discharged today, and is now arrested and transferred to the north Zealand police.

the Police will on Sunday afternoon to demand the man in custody at a grundlovsforhør in the Court in Hillerød. He is put in connection with a robbery-like conditions in Snekkersten, north of copenhagen last week, where BMWen was stolen.

- We have a review of blackmail, unlawful coercion and theft, where your car disappears from the scene of the crime, confirms efterforskningsleder Michael Eg, north Zealand police.

- We believe that the arrested person can be put in the context of the relationship, where we are also looking for more medgerningsmænd, says Michael Eg.

Therefore, the police will require in open court; when the accused will be produced in grundlovsforhør.

the Accident occurred at. 05.51 Sunday morning, where police spotted the missing muskelbil and started a eftersættelse.

A few hours earlier, at 03.09, went a different eftersættelse wrong, when the police attempted to stop a car with three young men. They tried to get away, but påkørte a taxi on Bernstorffsgade in Copenhagen central Station.

The three young people between 19 and 21 did not hurt and was arrested. The case has nothing to with eftersættelsen of BMWen in Vasbygade to do.

The stolen BMW burned out on the Ingo-shell after it was run wrong. Photo: Kenneth Meyer