One day, while the now-retired Dutch Kees Veldboer still worked as ambulanceredder, he had little time to spend with a dying patient, as a transfer had been del 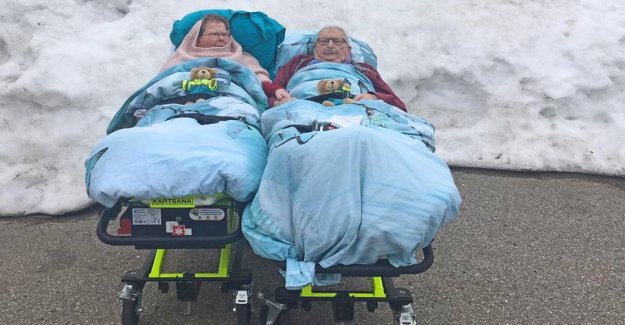 One day, while the now-retired Dutch Kees Veldboer still worked as ambulanceredder, he had little time to spend with a dying patient, as a transfer had been delayed.

to pass the time he asked the patient how he would like to go.

the Man answered immediately 'port of Rotterdam', and in that moment decided Kees Veldboer to meet the man's desire. At the port, he arranged that man could get with out sailing one last time, while he still lay in the stretcher.

It writes among other uk Metro. Also the BBC on the Dutch newspaper rtl has, among other things referred to the history of the now 60-year-old retired ambulanceredder.


A year after his experience at the port of Rotterdam started the Kees Veldboer Stichting Ambulance Wens together with his wife, Ineke.

He bought a whole fleet of old ambulances, which he now uses to run dying patients to fulfill their last wish.

- It is so nice to see them happy - for us it is easy to do, but for them it is very special. We have worked with patients many miles, even to other countries, and taken them to some amazing places, " says Kees Veldboer, according to the uk Metro, and continues:

- But, for me, is the most beautiful we have done was when a woman was on hospice from the hospital a month after getting his terminal diagnosis.

- The only thing she wanted was to see his home one last time - we took her there, and she just stood there for an hour and looked around. Two days later, she died. It was such a beautiful wish, so simple and yet so meaningful for her, says Kees Veldboer.


Stichting Ambulance Wens try to fulfill as many last wishes, they can, no matter how warped or cumbersome they are. In most cases, patients ' relatives do not even have the opportunity to meet the wishes, because the patient is unable to leave his hospital bed or otherwise immobile.

the Organization consists of a total of 270 volunteers, all of whom are medically trained in case there should arise an emergency situation with the seriously ill patients.

According to their own calculations, they have so far met over 14,000 patients last wish.

Recently we went to the Rijksmuseum in Amsterdam, where dying patients could come to experience an exhibition with Rembrandt.

another of his tours went to a football game where two fans wanted to see their favorite team Ajax play one last time, and a terminally ill grandmother was allowed to experience to meet his newborn grandson, before she died. In a third case bad a dying few to be allowed to see the snow for the last time, and it was also met by Stichting Ambulance Wens.

- It is not only to help the patient. We also help their families and friends to create beautiful memories. We can't cure them, but we give them so much joy in their last days, and it is specifically, says Kees Veldboer.