Mayor of mega-turbines: Wouldn't even live there

As the politicians in Jammerbugt Municipality voted in favour of the mega-mills, it came to pass, after they had received 197 objections. Here many were worried 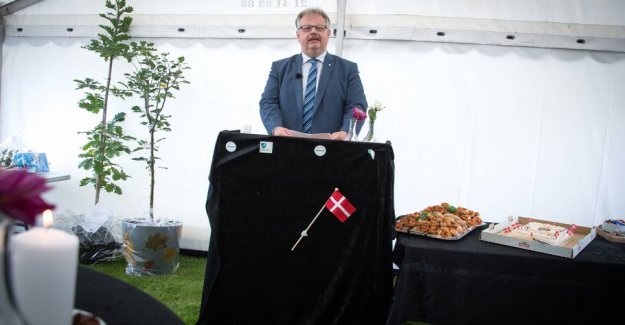 As the politicians in Jammerbugt Municipality voted in favour of the mega-mills, it came to pass, after they had received 197 objections. Here many were worried about the noise, people and animal health and the decline in house prices.

In spite of objections and the massive protests voted in the municipal council and the mayor Mogens Gade (V) for 11 new wind turbines at the North Axe Lake.

– Why have you not listened to the objections and protests that have been?

– We have tried to take into account the objections that have come from citizens and from the diocese.

– I know as well that there is a desire that we should address it further, and that perhaps there should not be any wind turbines out there, But there are the facts in connection with the consultation picked mills out of the original plan, but Denmark has drawn up a strategy in relation to sustainability and climate change, and it is also one of the things we have to take responsibility for locally.

– Could you not put them up somewhere where they are not a nuisance to citizens? F. ex. on the sea?

– It is not what it's about. It's not about the sea versus the land. So must the government and the Danish Parliament to designate some areas that are located out at sea. But we need to reach the climate goals, there must also be land based ones.

– It is not an either or. It is a both and. Of course turbines out of sight on the sea is a good option, as the State then must put in the time.

– What would you say to the citizens in the area who are concerned for their health?

– I will say that we must go out from, to the law, that is, to ensure their health. How far it shall be for residential purposes, and how considerations should be in relation to noise, it is the Parliament that set up the requirements.

The new turbines are over twice as large as the existing. Photo: René Schütze

– But of course I can well understand that people are concerned about, and I have respect for

– People say that you do not even want to stay there, where the big wind turbines up. Do you want it?

– No, I will not break me to stay there. We must recognize that there are some inconveniences of living in the vicinity of the wind turbines, and therefore, should the Parliament to compensate the people financially – and that with considerable amount far greater than the amount, the Danish Parliament has just decided.

See also: Citizens are raging while the municipality scores the box

– What should the compensation be for, that it would be attractive to live there?

I have heard that some of the citizens out there are getting the 80,000 crowns. I think that is a ridiculous amount, ending mayor Mogens Gade.

Extra Magazine has reporters and photographers all over the country and have these days opened a temporary editorial board in Brovst in northern Jutland.

Three employees holding right now in the northern jutland town in Jammerbugt Municipality in order to write about the things that move in the local area - among other things, the fight of mega-turbines.

– Extra Magazine takes all residents ' problems seriously, and therefore we Brovst this week. There is a need for some dry, where the other media apparently tier, says editor-in-chief Poul Madsen, who himself is coming to town on Thursday 9. January.

Meet him between 12:30 and 14:00 in the abandoned baker in Jernbanegade 6, where the Extra Leaf has decorated himself.

you do not even Have the opportunity to lay the road past the disused baker, Poul Madsen this call:

– Write to us at 1224@eb.dk if you need, we also looking past your city or examine your history.