on Wednesday, yesterday the case against Thorbjorn Olesen his second round in the british legal system. This time in the Crown Court, which is the stage of th 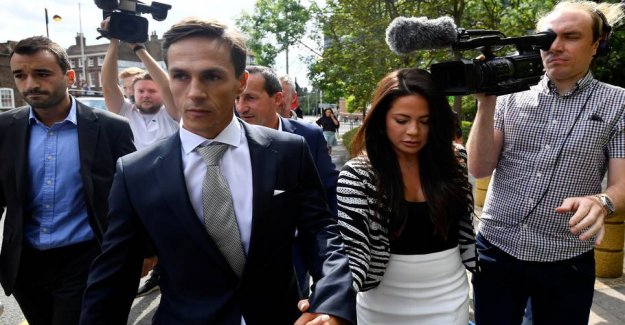 on Wednesday, yesterday the case against Thorbjorn Olesen his second round in the british legal system.

This time in the Crown Court, which is the stage of the Magistrates Court, where the Danish golfstjerne four weeks ago participated in the first consultation in London. And rejected all three conditions, he is accused of.

According to the prosecutor Amber Chodra should Olesen have kissed a flight attendant from British Airways on both the hand and neck, like he was supposed to have affected him on one breast during a flight from the US to England. In addition, the 29-year-old golfer accused of having urinated in the plane's aisle.

However, there is thus disagreement about what, exactly, was going on on the flight BA222 from Nashville to London 29. July.

A flight, in the worst case can send olesen's career far out in the rough.

Three charges hanging over the head of Thorbjørn Olesen. The first is the "sexual assault on a female", which covers over contact of a sexual nature without consent. This, according to English law is punishable by a fine or imprisonment of up to half a year. The same maximum penalty applies to "assault by beating", as Olesen also is accused. Finally golfstjernen accused to be drunk on board the plane . The latter can lead to a fine.

since the arrest in Heathrow Airport, he has been suspended from both the European Tour and the PGA Tour.

So there ticks no points on the world rankings, where he is on the most recent edition is number 69.

The table is a complicated process. The players collected points will apply two years back, and the points are then divided by the number of tournaments players have participated in.

On the led can take some time, before the big jerk down takes place. However, there is a parenthesis in the equation for the two-year period, and the rule can, in the long term hurt Olesen.

It tells golf-expert Henrik Knudsen for the Extra Magazine.

- He is down on 47 counts tournaments. When he comes down on the 40 tournaments, stops you to fall. On the led it will here (olesen's absence at tournaments, red.) not have the greatest effect in the first few months. After christmas we would have the ballad, but I wonder if there is a guard rail before then, says Knudsen.

It can only be hoped for Olesen.

Speculation about, whether any punishment can result in the prohibition to travel to the UNITED states has flourished several places. Will it end up like this, it may be fatal for Olesen.

- It will be as good as impossible for him to continue his career on the level, if he will not be able to play three of the four Majors. Two out of the four World Golf Championship is settled in the UNITED states. It is clear that he would be hampered tremendously, if not, he can play with them, says Knudsen.

the Expert stresses, however, that it does not make sense to draw negative conclusions in advance.

Henrik Knudsen points out that Firth is not judged, and the world still needs to hear golfstjernens version of the story.

the get The probably on Wednesday.

Extra Leaf is in place in court, and the hearing can be followed directly here on the site.

Sports and Games Violent accusations threaten his career: Smart moves can save the Danish star