Loop will be speaking about his exit

Since Lars Løkke Rasmussen (V) two weeks ago resigned as president of the Left, have been quiet from the former prime minister. except for a couple Of posting 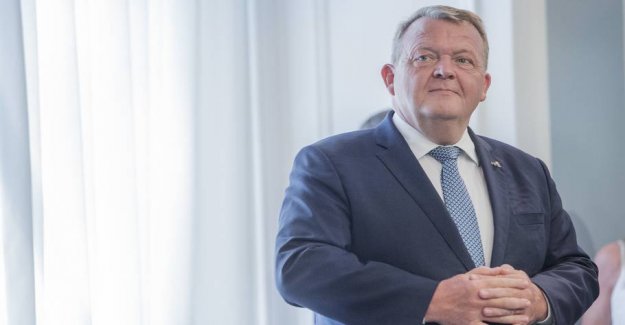 Since Lars Løkke Rasmussen (V) two weeks ago resigned as president of the Left, have been quiet from the former prime minister.

except for a couple Of postings on social media, there has been silence in public from the Left-the politician who walked by after the turmoil of the presidency in the party.

Sunday night will Loop, however, put the words on his goodbye as president in an interview with TV2 at 19.10. It informs TV2.

the Loop pulled 31. august after a meeting of the Party's central executive committee at the hotel Comwell Kellers Park in Brejning at Vejle.

the Meeting left Lars Løkke Rasmussen at bagudgangen, and he asked not to comment on his departure to the press.

It did, in turn, Kristian Jensen, who after the meeting of the main board elected to withdraw from his post as vice-president.

the Loop has, however, made a couple of postings on social media. First a report of his departure:

- Important to hold on to his self-respect. Can not be chairman of a party, where I, as a president cut off from my ability to get discussed and tested the political line, I have posted in the convention forum, where the I is chosen. Thank you for many good years, he wrote 31. august on Facebook.

the Same evening he put a posting on the Instagram where he is seen along with his family and wrote that "nothing is more important than another: the Family is gathered".

the Liberal party, the new president and vice-president elected at an extraordinary national congress 21. september.

Jakob Ellemann-Jensen (V) is the only candidate for the presidency, while both Ellen Trane Nørby (V) and Inger Støjberg (V) have signed up as candidates for næstformandsposten.