Loop reveals: We followed the City long before he was known

Lars Løkke have talked and talked. Written and screamed. For years on tv, radio, newspapers and Facebook. But there are more words in the man. Even though he 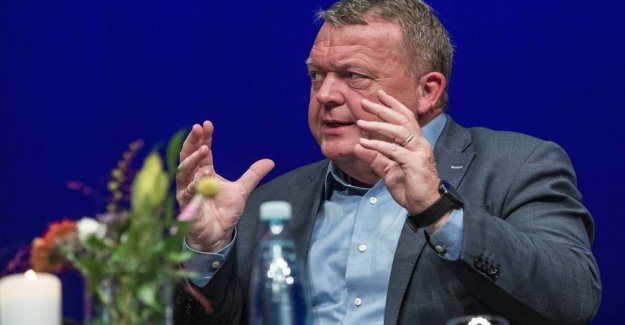 Lars Løkke have talked and talked. Written and screamed. For years on tv, radio, newspapers and Facebook.

But there are more words in the man. Even though he left the big stage in the Danish policy of a backdoor in Brejning.

on Wednesday evening in Tivoli - a place where gækken have been turned loose for even longer than even the Loop can achieve - have 700 people arrived and paid the ticket price for 314 kr. the piece.

the Initiation of the conversation was about how the Loop believes that the systems take up too much space in relation to particularly vulnerable social groups. Therefore, he will continue his work among other things in the Loop-the fund and with Gadejuristen.

ralph waldo emerson in the pipeline
was Later the conversation a bit more hard-boiled.

As the speech falls on the firm-manager Rasmus Paludan, comes the Loop even with a detection from the government's inner space.

He tell that one of the government's security committee in far longer time than the general public immediately has known to have followed the Rasmus paludan's provocative demonstrations in the ghetto areas.

- I had followed him a long time in the government's security committee, says Loop.

Authorities held, among other eye with paludan's the burning of korans, he tells on.

It was also not YouTube videos, as did Rasmus Paludan famous, but a DR-documentary, believes Lars Løkke, recalling that vælgererklæringerne poured in after the mention on national television.

Elephants in the room
Before the break in Aarhus commented Lars Løkke not magtopgøret in the Left with other than laughable.

- It may well be, I am naive. I discovered also not there was no would of with me, said, among other things.

Nor is the question of the SV government, as the new Left-chairman Jakob Ellemann-Jensen has put distance, has the Loop been touched on.

Extra Magazine follows the second section of the event.

along the Way in the lecture delivered Loop part fast lines. Here are three of the better.

1. About life after denmark

- I miss Marienborg. But I will not be homeless.

I flew a little cheaper than the horse.

(Loop driller the former nyhedsdirektør in DR Ulrik central park, which is on the stage)

3. Whether it is private-Lars or the ex-prime minister of denmark-Lars on the stage

- This is a great new fusion. It has always been.