Long-awaited prisoner exchange in Ukraine is gone in time 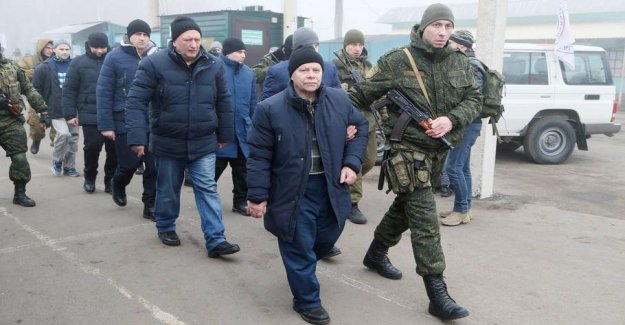 The Ukrainian authorities and prorussiske groups in the eastern part of Ukraine on Sunday launched an agreed exchange of prisoners.

- the Exchange of prisoners has been initiated by Majorske-checkpoint, according to a tweet from the Ukrainian office of the president.

Political leaders of the self-declared republic of Donetsk in eastern Ukraine, announced earlier in the weekend that Kiev and the Donbass (the eastern Ukrainian region, ed.) agreement had been reached, that the exchange of prisoners should take place on Sunday.

the Exchange Sunday happens three months after a long-awaited prisoner exchange between Russia and the Ukraine. Here trading countries 35 prisoners each.

Ukraine's government is expected to share several police officers, which is believed to have killed protesters during the provestlige uprising in the country in 2014.

the Uniformed men with submachine guns were posted at the site of the exchange at the village of Odradivka.

the Agreement on the new exchange of prisoners came in place after the peace talks in Paris on 23. december.

At the summit met political leaders from France, Germany, Russia and Ukraine. They agreed on a ceasefire and a withdrawal of forces from conflict zones in the area of Ukraine from march 2020.

Since Russia in the 2014 annexation of the Crimean peninsula, has the relationship between Russia and Ukraine has been very tense.

More than 13,000 people have been killed and a million have fled their homes since the prorussiske militias in eastern Ukraine in 2014 began the fight to become independent.