Interview with the minister Lamorgese: controls on new year's Eve will be tough

"The clubs open last summer, have contributed to multiply the contagion from Covid-19. We can't do this, for this we will be inflexible in controls and sancti 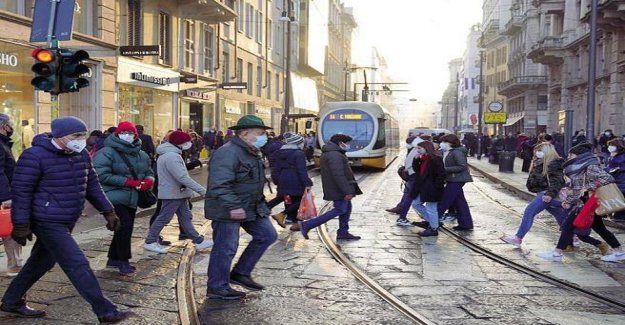 "The clubs open last summer, have contributed to multiply the contagion from Covid-19. We can't do this, for this we will be inflexible in controls and sanctions". The line of the minister of the Interior Luciana Lamorgese remains rigorous, even more for the new year's Eve.

There will be special controls to prevent the parties?
"We have a deployment of forces of the order imposing and we are very focused also on the monitoring of the internet network to prevent affittino homes where they meet, not in compliance with the rules, and distancing".

According to data from the interior ministry, the citizens comply with the rules, but the curve for the epidemiological will not go down. What does not work?
"We are still in a phase in which they will serve other sacrifices, acting with extreme prudence, but looking with confidence to the coming months which are crucial for the vaccination campaign".

it Should be mandatory for public employees to?
"All the citizens, and all the more reason public employees who perform a service to the community, are called to give good example to protect their health and that of others. I will do it when will it be my turn. The mandatory vaccination for now is not planned, because it is always desirable to respect the principle according to which no one should be subjected to medical treatment against his will".

Between the doctors and the medical staff there is already those who refuse him.
"Is an effort only capillary and the patient must rely on scientific data to stamp out the many fake news that are circulating on the effectiveness and safety".

The forces of law and order are committed to the controls and for the stocks to vaccines. What worries you the most?
"At the moment there are any particular issues, even if I consider unacceptable the threat of death no-vax, addressed to the nurse of the Spallanzani who first been vaccinated in Italy. Similar episodes should be monitored carefully and pursued with the utmost rigour. Now that the vaccination campaign enters the operational phase, the Department of public safety and the sergeants-at-arms is responsible for adoption of the plans to escort the transport of the vials and to monitor the health of the target. But we can provide an additional contribution: the 310 physicians and 250 nurses of the central Directorate of health can be used to vaccinate the population, the staff of police forces and fire brigades".

And the controls?
"From march 11th have been almost 30 million checks on the people and 8.5 million of those on business. The italians have shown an attitude of great responsibility. And I strongly hope that this spirit of collaboration will be confirmed on the night of new year's Eve".

She is considered to be a rigorist. You are doing too little to contain the risk of contagion?
"The bans introduced by the government on the occasion of these Christmas holidays have been calibrated, and also for this have been accepted and respected by the vast majority of italians. On the other hand, the next step would be that of a lockdown generalized that would return the entire Country to the difficult months of march and April".

There is a risk lockdown in January?
"I hope not. Closures are differentiated by territory, representing the option to avoid dropping back in a total closure of the entire national territory".

does Not believe that the school, a strategic sector for each State, has been neglected?
"children have a vital need of the daily confrontation with the teachers and classmates that can't be replaced in the long from a computer screen. The re-openings scheduled for the 7th of January for at least 50% of the students in the presence constitute an essential objective. The prefects have done a valuable work, to organise public transport, and yesterday they all confirmed the adoption of the operational plans to ensure the resumption of teaching activities in the presence according to the directions of the government".

Has concerns about the social strength of the Country ?
"we Hope to leave behind a difficult year, but we are all aware that it begins a crucial phase in order to give a realistic prospect of recovery for the families and businesses that have suffered setbacks because of the heavier in 2020. It is necessary to give concrete answers, leaving behind us the controversy and unnecessary divisions also to give back confidence to the italians and consolidate the social framework".

Think that will be enough refreshments?
"Refreshments and incentives were fundamental in the first phase, to cope with the strong economic impact caused by the pandemic, but time investment also the medium term and reforms that give a perspective to the categories most affected by the crisis and offer a path of sustainable growth to our Country."

In 2020, are increased the feminicide. The months of closure have to be exaggerated in many situations, but does not believe that the assistance and protection system is lacking?
"The increase in requests for help anti-violence centres must persuade us of the need to contribute, each in its role, the strengthening of the "network alarm". It is fundamental to the role of the police to prevent the phenomenon also monitoring the so-called crime indicator, such as stalking, harassment, family and sexual violence. Women's murders are a tragedy without end, and we have to make the embankment, and with all our strength, as, unfortunately, it also reminds us of the murder of Agitu Ideo Gudeta, the refugee in ethiopian in the Trentino-south Tyrol has been an example and a model of integration".

what is missing?
"it Is in advanced stages of experimentation, the app "Shield" that allows operators committed on the territory to view a summary of the previous interventions performed at the same nuclear family. Allows you to have real-time information on the presence of children in the home, the availability of weapons, the presence of a person addicted to drugs or alcohol, on any previous personal injury suffered by the victim. Not always the case, unfortunately, but sometimes there is just one element of knowledge to intercept and solicit a request for help".