In tears: - be Able to cut off the head of myself

KUMAMOTO (Ekstra Bladet): Utrøstelige! For once, it was not an exaggeration, as the tearful Danish players came out in presseområdet after the cruel and extreme 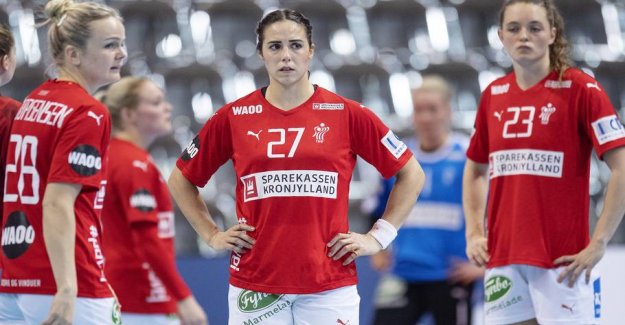 KUMAMOTO (Ekstra Bladet): Utrøstelige! For once, it was not an exaggeration, as the tearful Danish players came out in presseområdet after the cruel and extremely self-inflicted defeat to Serbia.

- I get the knob off, it is simply too little, that I can't shoot it into the goal. Ended up fucking! It is of course also the bead out to the end. It is the typical. Of course it goes not into. It is mega frustrating, says Györ-player.

She knows that now is four years for the next chance to get an OL with.

Louise Burgaard is clearly affected, forgrædt and with a voice that breaks over.

- It is just blank. I could cut off the head of myself, that I don't have the guts to last. It was everything we should stand for, and it is simply just not good enough. I will not go to sleep the next three nights, I am sure.

- I'm doing some fucked up bad decisions in the majority, where I just need to get scorching, that I is best for. It is not the last 20 seconds, we ’lose’ the match. It is, of course, all the mistakes we make throughout the fight, says Louise Burgaard.

- again, It is our attacking, lacking the sharpness, and I don't think I have completely understood how big impact it has. How much we have lost on the floor...

- It is 100 percent self-inflicted. We must be warriors, and we weren't. We knew well what was at stake, and what it required.

DHF reckon that the squad can fly out of Japan on Friday. However, there are some tickets to the Monday, which must project the with three days.

See also: Danish OLYMPIC shock: They failed with a bang