Here langer Loop out after Kristian Jensen in tv interview

There was not brushed under the carpet, as Lars Løkke Sunday night spoke out to the press, for the first time since he resigned as president of the Left 31. aug 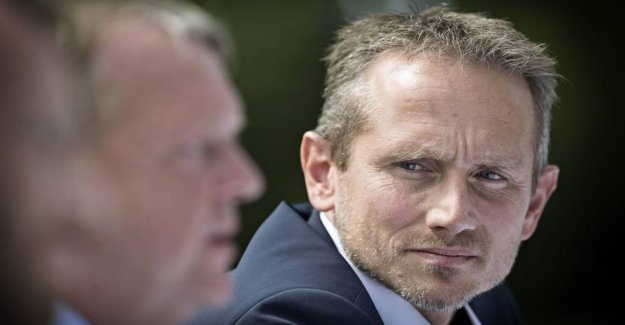 There was not brushed under the carpet, as Lars Løkke Sunday night spoke out to the press, for the first time since he resigned as president of the Left 31. august.

It happened in two major interviews in prime time on both TV2 and DR.

in Particular were hit out after the outgoing vice-president Kristian Jensen.

the Extra Leaf has been in contact with Kristian Jensen, who did not want to comment on the Loop on announcements.

Kristian Jensen has never made a secret of that he would have been the next president of the Left. Already in high school he said to the local television, that it was his dream, and since then he has done what he could to make it happen.

But just because he for several years has been vice-president, it was not a given that he should be president. That was the gist of it from Lars Løkke, who himself has had a different agenda.

In the two interviews he told that his plan has been that his colleague Jakob Ellemann-Jensen to take over the post:

- I have constantly had an eye to, to the day I had to stop, would Jakob Ellemann-Jensen be a really good president to take over.

I had not imagined that it would be right now. I think it's such a seen nor Jacob had. So the artistic impression is miserable, but it ends up there, where I constantly have the thought, it had to end, said Lars Løkke in both interviews.

Lars Løkke talked among other things about the formandsopgøret in 2014, when Kristian Jensen on a hovedbestyrelsesmøde challenged the Loop.

eventually he gave up and went with to be a part of the Liberal party 'presidency'. A concept Lars Løkke later has 'bitten herself in the tongue over', he told.

Sunday called Loop it 'a myth', that there has been a shared presidency, in the Left, between himself and Kristian Jensen.

See also: Loop on the Ellemann: I have always had a good eye to him

Later, he clarified, opposite TV2:

- We have never had a split management in the Left, and that we should not have it.

There was, however, one remark, many bed brand in the, namely this:

When I have composed my governments, so I have gone for skills. I have taken a special consideration to the vice-president because of what happened in 2014, but apart from that I've gone after skills.

On Twitter call the journalist at TV2, Kaare Sørensen quote for it 'perhaps the wildest Loop-quote of the evening'.

To the corresponding political analyst on the stock Exchange Helle Ib, that both interviews were 'imbued with the desire to smudge Kristian Jensen'.

Interview on both channels was, as I saw it, completely imbued with the desire to smudge the @Kristian_Jensen