He replaces Mette F. in the Park 1. may

Prime minister Mette Frederiksen (S) announced on Tuesday that she will not talk to the traditional 1. majarrangement in the Park. The reason was, according to 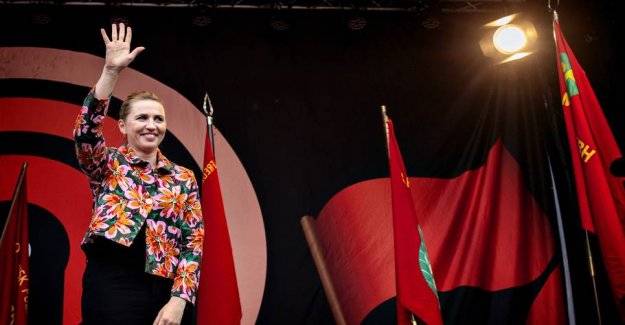 Prime minister Mette Frederiksen (S) announced on Tuesday that she will not talk to the traditional 1. majarrangement in the Park. The reason was, according to the S-the chairman, that there is too much trouble for the event.

the Organizers have, however, found a replacement for the prime minister. It becomes the minister for employment Peter Hummelgaard (S). This was stated by the president of the LO in the Capital Per Olsen.

in addition to Peter Hummelgaard will also SF's chairman, Pia Olsen Dyhr, and the Unity of the political rapporteur, Pernille Skipper, to speak on the main stage in the Park the 1. may.

Mette Frederiksen justified on Tuesday his decision on the fact that in recent years has been the civil unrest in Fælledparken on international workers ' day.

halfway into the Mette Frederiksen 1. may-talk last year stopped she halfway. Who exclaimed, namely, the commotion in front of the stage, and, therefore, she kept a short pause and said:

Friends, you can disagree in a democracy and you can shout. But not to fight, said Mette Frederiksen, as the short-lived brawl in the audience had been stopped.

Last year at the international women's day was Mette Frederiksen is not prime. It was about a month before the Party won power at the general election 5. June.

Helle Thorning-Schmidt (S) was greeted by activists with whistles and subsequent scuffle, when she gave a speech in Fælledparken in 2014.

And back in 1992, then-S-president Poul Nyrup Rasmussen, among others met by the toss with the tomatoes in the Park.

Politicians from other parties over the years also been subjected to rough treatment.

Notwithstanding the sometimes harsh climate of the speakers keeps Mette Frederiksen stuck in that 1. may should be a celebration. She will instead talk elsewhere in the country.

S-the president was on Tuesday asked whether it is so for time and eternity has ended with the big talk in the Park:

- There is never anything that need to last for all eternity, but I have it such that I do not think the trouble and fighting belongs to the at 1. may. At least not where I have to participate, said Mette Frederiksen.

She was asked if she did not, like his predecessor, Helle Thorning-Schmidt ought to show 'courage and grit' and implement his speech in the Park. To the said Mette Frederiksen:

- For me it's not about what hits me. For I have become welcomed to the the vast majority 1. may-events.

- For me it's something more in principle. I think that the Park in many years have had it here balladeelement. I do not wish to support, said Mette Frederiksen.