Member of Parliament Kristian Hegaard (R), who is a wheelchair user, says, that he on Tuesday morning has been 'overfuset' by an employee of another party to 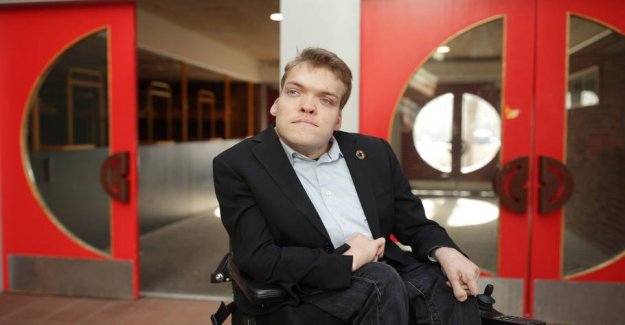 Member of Parliament Kristian Hegaard (R), who is a wheelchair user, says, that he on Tuesday morning has been 'overfuset' by an employee of another party to record the lifts at Christiansborg.

he writes on the social media Twitter and tells about the incident:

- A person was targeted into my office this morning and said that I wasted much of his / her time, by to use the elevator. And that I should know that he did not think it was in order.

- And that it was a position, several others shared, says Kristian Hegaard.

There has been put more work in just to make the Palace - and, not least, Folketingssalen - large to ensure that democracy is accessible to all.

He does not want to disclose who it was that criticized him for using the lifts, but says it was an employee by another party.

Therefore, it has not been possible, Therefore, to hear the other side of the case.

- I think it is completely unacceptable to give me a bollocking. And I was very shaken.

- For I think that all here are usually quite friendly and can see that the slow and unstable the lifts are very annoying for all of us.

- We have come a long way when it comes to making Christiansborg for all. But I feel that we took a small step back in the day. I hope of course that it only briefly, says the politician.

The radical politician to say that he has sent the case on to the Radical Liberal party head of secretariat, who will take care of it from here.

Kristian Hegaard sitting in a wheelchair because of a rare bone disease.

At the beginning of november, he became the first wheelchair user who spoke from the Parliamentary rostrum.

- To get up here is a small scroll for me, but I hope that it is a large scroll that even more can get the opportunities I have received.

- That more can achieve their dreams and create the hope, he said.

Sarah Glerup (EL) was the first wheelchair user in the Danish Parliament when she was a deputy in three weeks in 2016.