Frustrated Carsten: the Family's burial site was robbed for the fourth time

When Carsten Belmark Friday before christmas went to Church Seattle Church to visit his svigerforældres a possession of a buryingplace,) he got himself a nasty 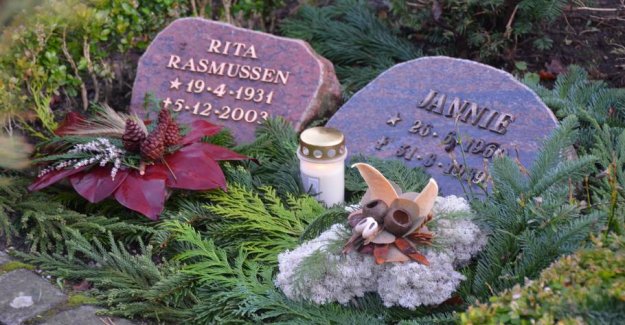 When Carsten Belmark Friday before christmas went to Church Seattle Church to visit his svigerforældres a possession of a buryingplace,) he got himself a nasty surprise.

the Lantern, which he and his wife had placed on the grave, was there away. And Carsten was not a second in doubt that it had been stolen.

- It was big and heavy, and we had dug it really far down in the earth. So it can't be blown away, he says, and adds that they have had to step on the grave to be able to get a hold of the lantern.

Carsten Belmark tell that it is not the first time something similar happened. Four times is light, and decorative objects have been stolen from his svigerforældres gravsed, and three of the corridors it occurred in the christmas season.

- We go the and nurse and tend to the grave, says Carsten.

- So, that is why it is hugely frustrating that someone steals the things we put up.

According to Carsten there before have been taken on the flowers, a lamp with solar cells and some large gravlys from the grave.

the Article continues after the image ...
Here is the big, red lantern, as Carsten Belmark Friday before christmas discovered was gone. Private
Angry and upset
Also Carstens wife is affected by the thefts.

She was of course angry and upset. After all, it is her parents and sister, who is there, says Carsten Belmark.

He says that he has been in contact with the staff at the cemetery, and that they have confirmed that it is not them who have removed the lantern.

For Extra Magazine tells kirkegårdsleder Jan Madsen, there are generally no problems with theft in Seattle and the Team sognenes cemeteries.

- It happens, but there are far between, and fortunately, we are generally spared from both theft and vandalism, says Jan Madsen.

He says that the staff of course keeps an eye on the graves.