Fear not Bendtner-book: - well, It's probably more dangerous to the other

the PARK (Ekstra Bladet): the FCK-manager Stale Solbakken has got a copy of your own copy There's much publicized book ’Both Sides’, which was released Tuesday 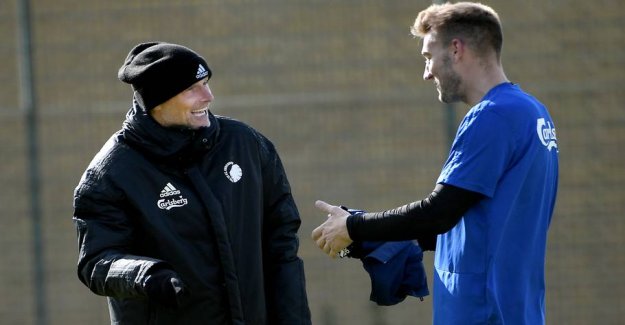 the PARK (Ekstra Bladet): the FCK-manager Stale Solbakken has got a copy of your own copy There's much publicized book ’Both Sides’, which was released Tuesday.

But until now I am the manager only scanning the book and have not going to go in the roll with the right first.

The historically interested Norwegian would rather read the book about the deceased Norwegian politician Reiulf Steen, who for many years was the leader of the Labour party, but was never prime minister of Norway.

- It is very good. The should I read first, and so it can be, I grab hold of There book afterwards, said Stale Solbakken with a smile after the 3-0 victory over south Jutland and told concluded, and with great enthusiasm about Reiulf Steen.

the Past in Norwegian politics interest him, apparently, more than Nicklas There's explosive book, but it must also be seen in this light, that ’Both Sides’ is not about FC Copenhagen.

the 31-year-old Bendtner made the book in collaboration with journalist Rune Skyum-Nielsen, before he had even started in the club.

Stale Solbakken has so far only bladret a little of 'Both Sides'. Photo: Jens Dresling
- I take it quietly. We knew that he had written a book, and if Nicklas Bendtner writing a book, so it is certainly interesting for many.

- I take care of the FCK, and I've got black-on-white from forlagsdirektøren, that it is a book that is completely safe for the FCK. Well, it's probably more dangerous to the others, " said Stale Solbakken, who did not use the bogaktuelle attacks in the showdown against south Jutland.

According to teammate Viktor Fischer, the upcoming book has not been the big theme in the dressing room, and Fischer didn't work either, as a man, who have thought themselves to stand in a queue in front of the bookstore on Tuesday:

- I must just be finished with Johannes V. Jensen's total poems first.