You should blink many times to overlook the Liberal party's vice-president, Inger Støjberg, who rushed away from the attending reporters after Tuesday's group 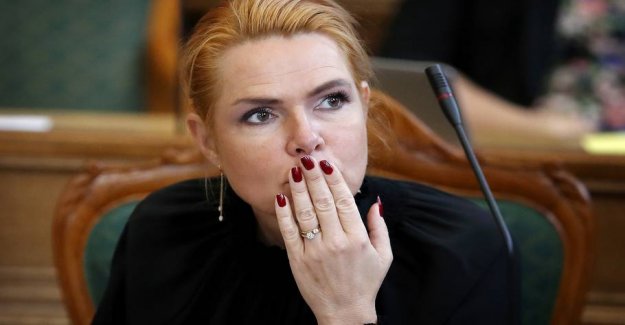 You should blink many times to overlook the Liberal party's vice-president, Inger Støjberg, who rushed away from the attending reporters after Tuesday's group meeting in the Left.

Extra Leaf was not going to let the vice president get rid and put her on the Christiansborgs stairs. Støjberg has been quiet as a mouse since the Left-profile Kristian Jensen on Saturday was stripped of its rapporteurships and udvalgsposter, because he came with a proposal for a new party collaborations over the middle, outside there was a consensus on it in the party.

Inger Støjberg has previously gleefully shared opinions, there is no consensus on the Left, and it naturally gives rise to some questions:

Inger, how can it be, that you must say something, when Kristian Jensen is not allowed?

- Jacob has shown said, what needs to be said, says Inger Støjberg.

do you Think it was a rough ride, Kristian Jensen got?

- Try to hear, I don't have any comments, says Inger Støjberg immediately following the day group meeting in the Left.

Støjberg has, among others, shared views on the situation in Iran, the expulsion of the muslims and the police the option of face recognition, there was consensus in the party.

Jakob Ellemann-Jensen took the big decision about Kristian Jensen's role in the party, after the former vice-president, in an interview with Jyllands-Posten suggested that the Left should go along with the government, The Radicals and the Conservatives about a big reform package on, among other tax and seniorjobordningen.

You can see his comment on the matter by the plenary assembly here: