METZ (Ekstra Bladet): In one corner of a nice cold hall in the 'Gymnase de La Grange-aux-Boix' is Lasse Svan and teareth in fyssens rubber bands, and it is ce 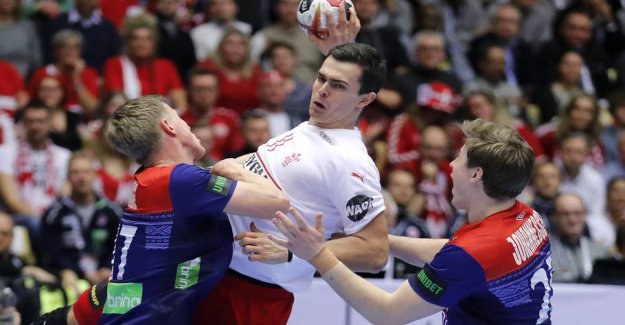 METZ (Ekstra Bladet): In one corner of a nice cold hall in the 'Gymnase de La Grange-aux-Boix' is Lasse Svan and teareth in fyssens rubber bands, and it is certainly not unexpected. Flensburg-wing has since christmas been struggling with the shoulder and time to get ready for the EM-start.

It is, however, ominous news that the trial Rasmus Lauge is on the floor and being regaled by a physiotherapist Anja Count. The focal point of the EM-the crew met otherwise fresh into landsholdslejren as the other, but two days before new year's eve ran playmakeren into a lægskade that keeps him out the next week.

however, He is confident in relation to achieving EM-opener against Iceland 11. January in Malmö. Lassse Svan is more questionable.

- I'm better than I was yesterday. Each day is a step in the right direction, says Flensburg-veteran, who has been suffering with a bad left shoulder since he was baldret out in a reklamebande shortly before christmas.

- Are you frustrated or hopeful?

I regret, of course, that I can not participate in the trainings and matches for the next few days, but now it is as it is, and I tried also two years ago, when I got pulled a muscle just before the new year. Then it succeeded, so I also hope it goes this time, says Lasse Svan.

- What is the diagnosis?

- Complicated. It is an old injury, I have torn a little bit in. It is somewhat a mixture of many things.

Nikolaj Jacobsen will not screw superoptimismen on:

Him, I am relatively unsure of – at least on on he when to be ready for the start of the tournament. There is progress, but We have not had a ball in his hand yet, and before the time comes, I can not say much more, says national coach and apologize.

- I close the right the door. It pulls like hell.

There is no reason to put colds and sore throat on top of the damage the day before, Denmark meets Norway in Metz. Sunday, waiting for the hosts from France in the impressive hall in Bercy by the river Seine.

It would never happen in football, that you met the two future opponents so short a time before a championship!

- It is of course a little unfortunate, but now we have the Golden League cooperation, which provides a lot of opportunities - also commercially. So on the way is it really, really well, and we are happy for it, says the national coach.

France has so chosen NOT to meet Norway this time. Instead they invite Serbia.

- We must accept that, when Norway and France will meet each other in their european championship group, so they have chosen not to engage in this tournament. But it had been fun for us to play against some other, but the handball was so small, that there are some limitations.

- You have had an autumn without the stress of a German club. Can you feel the difference?

- Yes! It seems to me, and I have since heard that some of the players complain about, that I'm just fresh enough. Haha.

- Is the mouth, running a little too well-oiled?