A Danish expedition, consisting of Christian Lygum Christensen, Jona Moralla Christensen and Esdras Gill went in the summer into the Guatemalan jungle in search 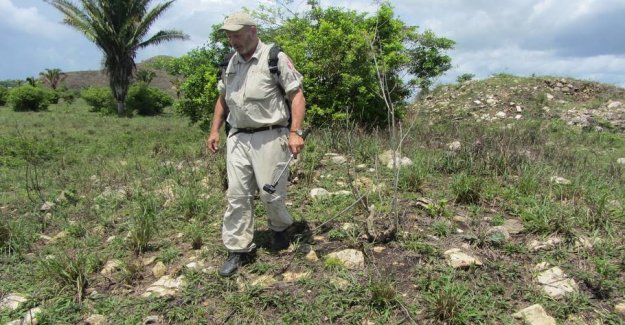 A Danish expedition, consisting of Christian Lygum Christensen, Jona Moralla Christensen and Esdras Gill went in the summer into the Guatemalan jungle in search of ruins from the mayan culture. According to the expedition they found a 1200 years old and so far undetected tempelby.

The newfound tempelby is located to the north of Machaquilafloden in the Guatemalan state of Petèn. The city covers an area of approximately two square kilometers and is believed to be abandoned by the year 900. It writes the expedition in a press release.

For the Danish tempeljæger, Christian Lygum Christensen, who has chased the ruins and temples since the'80s, it comes as a surprise that no one previously has discovered the city, if the new name is La Macharona.

- Only a few people within mayaarkæologien have explored this area in Guatemala. Possibly because no one has had the great expectations that there would be tempelbyer here. But in fact, we found in the summer several ruined cities, which with high probability is also completely new findings. It may take a long time to get all the data processed by the experts, so right now we can't do anything other than keep my fingers crossed that our discoveries are recorded and can contribute to increased knowledge about the mythical maya, says Christian Lygum Christensen in the press release.

According to Christin Lygum Christensen has La Macharona been a plain, slightly larger city. It has six of the characteristic mayaplatforme with at least 28 collapsed ruins at the top. The largest platform is 125 meters long and 45 meters wide, and the highest ruin is 10 metres. The platforms are, by all accounts, listed in the senklassisk time of year 600-900, but there are still many unanswered questions about the city's history:

- Because the La Macharona is just 15 km to the east of the royal mayaby Machaquila, I am curious as to whether it can be identical with the fabled tempelby Ah Coal. According to the ancient writings was the ruler of Scorpio from Machaquila married with queen Ix from the Ah coal around the year 840, and since the city never is found, our findings might be the queen's birthplace, says Christian Lygum Christensen.

the Registration of the newly discovered tempelby is done in cooperation with archaeologists Jorge Chocòn from Atlas Arqueologico de Guatemala, and Guido Krempel Germany, as well as the researcher, Karl Herbert Mayer, Austria.

Jona Moralla Christensen to the left together with Esdras Gill in the blue shirt. Photo: Christian Lygum Christensen

Since 2013, Christian Lygum Christensen operated out of a small Cessna plane to explore the overlooked mayaområde the west of the city Poptùn. According to him, it is easier to spot the ruins from the air due to the increasing jungleafbrænding.

Maya has the last 100 years intrigued both archaeologists, adventurers and lay people. The culture, which was the largest on the american continent, was almost wiped out around the year 900. Large areas in central america were laid waste, and the actual cause is, as I said, still not clear.

in the 1900-century archaeologists to find some of the mayan hidden tempelbyer. among other things, the pyramid in the El Mirador in Guatemala. It is more than 70 meters high and has a volume of 2.8 million cubic meters.