DSB-customers of the new monitors: the text Can be bigger?

Hi DSB - Exciting new displays, And the fat that there is a number on the. - But I want to hear about the text can be bigger? - You must be pretty close to 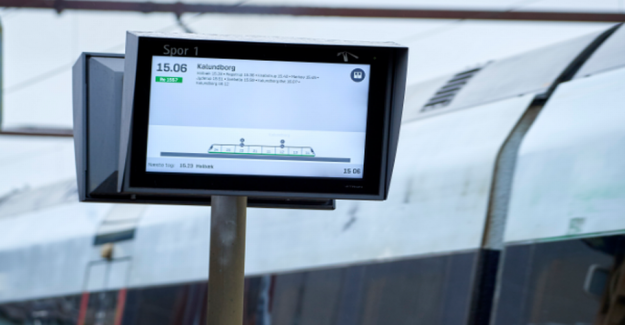 - Exciting new displays, And the fat that there is a number on the.
- But I want to hear about the text can be bigger?

- You must be pretty close to see that the train runs to Østerport.

How to write Elisabeth H. on Dsb Facebook profile, on the new-designed bright and light afgangsskærme, which right now is being tested at 13 stations between Esbjerg and Roskilde.

The new design is according to safety must be made to make trafikinformationen at the station more manageable. Passengers can f.ex. on perronskærmene see where on the platform the train is, and which parts of the train, running to where. And as something new you can also see what time the train is advancing at the individual stations on the route, where cykelvognen is, and whether the doors are about to close.

But Elisabeth is not the only one who has written, what she thinks about the screens: Mikael S has also written to the DSB:

- New design on the info screens?

- Fine with more info, but impossible to see at a distance as they mature, writes Michael, and Marcus W have also noticed that the text is hard to read:

- Seems really good on the new screens, but certainly agree with, that there is plenty of space to make the text larger, so the weak-sighted can also see what it says, writes Marcus, and Ida - who do not write, if she is visually impaired - believe that the new screens are absolutely impossible to read:

- Completely impossible to read at just the minimum distance. At Roskilde station you can usually read the time of departure and terminus down from the tunnel , before you went up on the track so you could easily orient themselves. It is impossible now.

- It is also impossible to see delays when you stand just a few meters from a screen, writes Ida, but fortunately, it seems that the DSB take our messages seriously:

- There is a period of testing, which runs until the middle of december. Here will Banedanmark among other things, test the technology behind the new design.

- of course We would really like to follow up on the feedback we get from our customers, so I'll make sure to send your pointer on to Banedanmark, writes Mads from the DSB, but what do you say?