DMI warns the third weekend in a row

Strong winds, rain showers mixed with sunshine and the risk of elevated water levels in the Limfjord and along the Danish west Coast is developing into a bit of 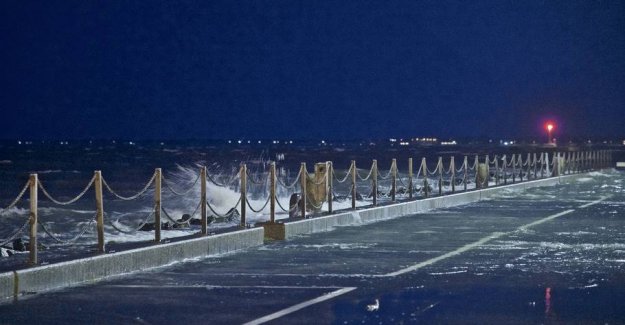 Strong winds, rain showers mixed with sunshine and the risk of elevated water levels in the Limfjord and along the Danish west Coast is developing into a bit of a weekendklassiker for this February.

This weekend is going to remind you of the previous two, where the strong winds from the southwest and west have moved large water masses from the North sea towards the western shores, and scored vandstandene to rise in the Limfjorden and the Wadden sea.

the Weekend comes again to stand in the blæstens characters because of the strong westerly wind, but there will also be a del sol - especially on Friday and Sunday, says Klaus Larsen.

In the first place is the Limfjord in the firing line. DMI has issued a warning of increased water levels for the western part of the Limfjord, which applies from Saturday afternoon to Monday.

- But there is also a risk for elevated sea levels along the west coast and in the Wadden sea, says Klaus Larsen.

The mild temperatures - of the season taken into consideration, will also continue.

- It will be between five and eight degrees celsius over the weekend, but due to the strong winds it will especially Saturday feels like freezing weather, says Klaus Larsen.

After a rainy start on Friday, it becomes "quite nicely" with the one part sunshine.

Saturday will begin with cloudy weather and rain. Out of the day to come to that clearing from the west with more rain and fresh winds to gales. Supported up to fierce gales with gusts of gale force.

Sunday there again the wind and rain showers in the programme, but mainly in the south-western part of Jutland.

- But the whole country also get part or no sun. In the afternoon especially northern jutland in getting a lot of sunshine, says Klaus Larsen.