Broke down in the Lion's den: - We subscribed only for the PR

It was five impressed the lions, who Thursday evening sat in front of the Christian Juel Olsen and Kevin Eggert Christensen, as the two pitched their invention 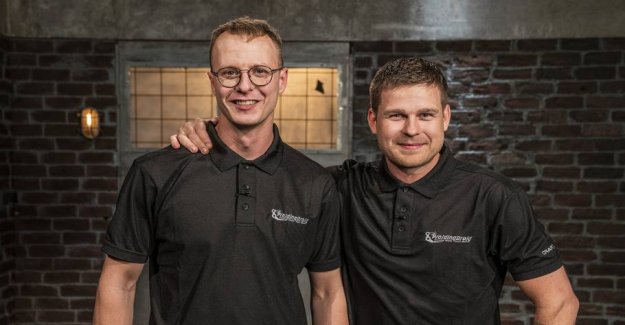 It was five impressed the lions, who Thursday evening sat in front of the Christian Juel Olsen and Kevin Eggert Christensen, as the two pitched their invention in the 'Lion's den'.

The two entrepreneurs sought to 200,000 crowns for ten percent of the company Weldingdroid, which sells a special soldering machines, which have automated an otherwise hard and time-consuming process.

Jesper Buch and Jacob Vogl ended up with throwing money at the two-minded schleswigers, and the lions bought each 15 percent of the Weldingdroid 200,000 crowns. And it was something that Christian Juel Olsen and Kevin Eggert Christensen had not dared to imagine before. It says the latter for the Extra Magazine.

- It is quite surreal. We went to the really only in there to get PUBLICITY. We are well aware that what we have is simply so technical that the lions have never invested in something like that. We did not think that they would understand what we are doing. So it was really just for PR and to get in the tv. We had delete, delete is not an expectation to get an investment, says Kevin Eggert Christensen.

- the Whole day was truly a feast. We had a great time and laughed a lot with the production, and it was really bonderøvene, who came to Sealand. It was a celebration both before, during and after. I can't describe it, he laughs.

Christian and Kevin left the 'Lion's den' with an investment. Photo: Per Arnesen/DR


But an investment they got well, even though they had to give themselves a little on valuation. However, it is not a decision they in no way have regrets.

Weldingdroid sold on Wednesday, the second machine in the company's life, and the next week offers a further five showings.

- There is a big interest right now, says Kevin Eggert Christensen, who only expect greater interest after they have been shown in prime time on DR.

- The here business is going to poke completely. It gets quite wild. We come up with a technology that has not been seen before in the svejsebranchen. Not at all. We are firstmovers, and now we just have convinced the industry that it is here simply the new.

the Duo have three machines in stock, which is expected to be completely finished in mid-February.

- But I fear a bit that we just need to make a few more before then, he laughs and says that their invention also could be used on other types of machines in the future, so the target group is not only the waterworks, there has been much talk about in the program.

Christian and Kevin impressed the lions with their pitch and product. Photo: Per Arnesen/DR


Both Christian Juel Olsen and Kevin Eggert Christensen is from 1. november gone all in on the Weldingdroid, as their ambitions were when they pitched the product for the lions.

To Weldingdroid and investment from the lions means a lot to the duo, there was no doubt, as the cameras caught them immediately after participation in the program. Here was the joy, and Christian Juel Olsen broke down and had to wipe tears of joy away from the eyes.

- It is his life's work. He has worked on the management in three years, and it is the backbone of our machine, says Kevin Eggert Christensen.

He tells them that they already have got a lot out of sparringen with Jesper Buch and Jacob Vogl, who has helped with helped them to avoid some of the mistakes, as the lions themselves have committed in their early years as entrepreneurs.

Why is the right happy that they have got them on board, and the joy is absolutely reciprocated with Jacob Vogl.

- They are the farmers - meant as a positive, as it is at all possible, because Jesper and I both have it. It was amazing and liberating to see the two, who had seen a problem and just resolved it, says Coolshop-owner, Extra Magazine, and continues:

- These things often come from the offices with men in white shirts, who think: 'It must the en be missing out in the industry.' Here it is created by those who actually stood with the warm beer. It's pretty cool that the market is created by needs and not just behind a desk.

Jacob Vogl is already a part of a robotvirksomhed, which draws lines on the football fields, and he will among other things help with the things he knows about the industry, while Jesper Buch must come with his drive and make sure that they maintain the hunger and the energy.

- It will be great. We have only managed to hold one meeting at all, but I am me, he says, and continues:

- Jesper Buch owe us is also still the dinner. We've not scored yet, and it is very important. And there should be snaps for laughs Jacob Vogl.