A bluefin tuna is sold for 193,2 million yen - equivalent to about 12 million crowns at an auction in Tokyo, Japan. It is the second-highest price for a bluef 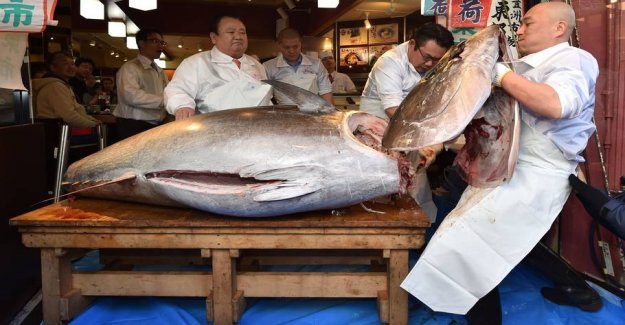 A bluefin tuna is sold for 193,2 million yen - equivalent to about 12 million crowns at an auction in Tokyo, Japan.

It is the second-highest price for a bluefin tuna in Japan, since the authorities began to record it in 1999, writes the news agency dpa.

the Tuna is weighed 276 pounds, and the buyer is Kiyomura, who is the company that runs the big sushirestaurant chain Sushi Zanmai.

- It is expensive. But I would like to have customers try the best tuna, says Kiyoshi Kimura, president of Kiyomura, to journalists.

the tuna fish was caught in Oma on the northern tip of Japan's main island, Honshu, which is one of the best fishing spots in the country.

The sold tuna is the second most expensive after the record was set last year, when Kimura paid a price on the 333,6 million yen - approximately 20.8 million dollars - for a 278 kilos heavy tuna.

the Japanese are some of the largest consumers of the blåfinnede tuna, and the country's overfishing has long been criticized internationally.