At least 73 killed in bomb explosion in Mogadishu

at Least 73 are dead after a violent explosion in the central part of the Somali capital, Mogadishu. It says the head of the city's Medina hospital, Mohamed 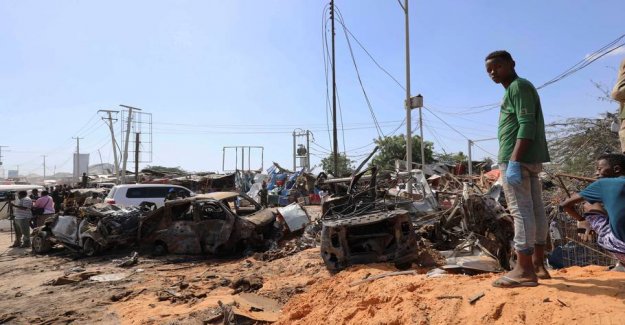 at Least 73 are dead after a violent explosion in the central part of the Somali capital, Mogadishu.

It says the head of the city's Medina hospital, Mohamed Yusuf, the German news agency dpa.

He adds that the number of wounded is at least 54.

the Former was at least 61 have been reported killed by Abdikadir Abdirahman Haji Aden. He is the founder of the ambulance service Aamin and commented to Reuters.

Police say that there probably was a lastbilbombe, which was sparked in a busy business district.

the Explosion occurred in an area that was particularly busy, because there is a much visited public institution, and because there was set up a checkpoint.

- There are so many victims, because there were many buses filled with, among other students, when the explosion occurred, says another eyewitness, Muhibo Ahmed, to the AFP.

Sakariye Abdukadir, who stayed near eksplosionsområdet, said to AFP the fact that several of his car windshields were destroyed by the pressure from the explosion.

- The last, I could see, was slain lie scattered around me. Many were burned beyond recognition, he says.

No one has taken the blame for the attack.

Mogadishu shaken regularly by car bombs and attacks carried out by islamists from al-Shabaab, which is allied with al-Qaeda.

the Group was forced out of the Somali capital in 2011, but the checks still some rural provinces, and it operates also in neighboring Kenya.

two weeks ago, five people were killed when members of al-Shabaab attacked a hotel in Mogadishu which is popular among politicians, diplomats and officers from the army.

the FACTS: What is al-Shabaab?

No group has yet taken the blame for a violent bomb attack in Mogadishu on Saturday. A large number of people have been killed and injured.

the Suspicion is, however, directed at jihadists in the group al-Shabaab, which is allied with al-Qaeda.

Including facts about the group:

* Somalia, located on Africa's Horn, has been torn by conflict and chaos since 1991, when warlords from various clans crashed a dictator.

* The militant, sunni islamist movement in Somalia was formed in 2006 on the remains of the group of The Islamic Courts. The objective is to introduce sharia law.

* Al-Shabaab was driven out of the Somali capital, Mogadishu, by government forces in 2011. The have, nevertheless, regularly carried out bloody attacks in Somalia and in neighboring Kenya.

* the Ideology put al-Shabaab on al-Qaeda and was in February 2012 officially the network's somali branch.

* Foreign jihadists have traveled to Somalia to join the group.

* Al-Shabaab is believed to have between 5000 and 9000 members. It is considered to be one of the most brutal and merciless islamist groups in Africa.

* In the 2013 attack members of al-Shabaab in a shopping mall in Nairobi, Kenya. Here barricaded themselves in 80 hours, along with several hostages. 67 people were killed. Two years after the did group, another attack in Kenya. Almost 150 people at a university was shot and killed.