Famagusta 14°
overcast clouds
BUSINESS EDUCATION ENTERTAINMENT HEALTH POLITICS SCIENCE SPORTS TECHNOLOGY
10:22 Four Benefits of Hiring a Dedicated Development Team
04:48 Mark Kelly, President of Safety Marking Inc., Discusses Structuring Effective...
17:58 Trump wants to play golf at the Biden swearing-in in Scotland - but is...
17:54 First doubts Regarding tightened Steps: two National Countries Extract...
10:39 Covid-19 : in France, the end of containment and entry into force of the...
04:34 The schools of Rome will use the Internet with light bulbs: what it is...
10:58 Kratom Tea: How Is It?
11:46 Office Furniture Products for you!
12:17 Top Clubs, Their Value, Revenue And Current Standings
11:14 Reasons Why Rewarding Yourself is a Good Practice
BIST
1467
GOLD
437.811
USD
7.3775
GPB
10.1161
EUR
8.9266
Breaking News
Navigating a Hearing Disorder Diagnosis
Close

371 children have died in the notorious camp

at Least 517 people - mainly children - died in the Al-Hol refugee camp in Syria in 2019. It informs the kurdish relief organisation, the Red Crescent, accord 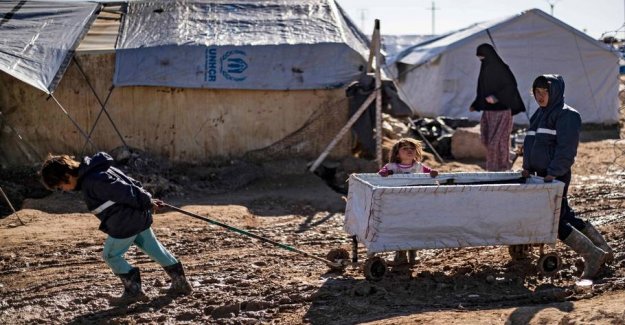 It informs the kurdish relief organisation, the Red Crescent, according to AFP news agency.

According to a spokesperson from the Red Crescent is 371 children among the dead.

The humanitarian situation is not good, and it is one of the reasons why many children die. Photo: Delil Souleiman/Ritzau Scanpix

the Camp houses people fleeing the war in Syria and the relatives of persons who have fought for the militant group Islamic State.

The kurdiskdrevede camp is situated in the northeastern part of Syria and home to approximately 68 000 people. They are all deeply dependent on aid - particularly during the cold winter months.

Under - or malnutrition, poor health care for the newborn and the cold during the harsh winter months is among the most frequent causes of death for children.

the Situation is tragic, and it is a big burden, says spokesman for the Red Crescent, Dalal Ismail, to the AFP.

She adds that there are several foreign children among the dead.

In the Al-Hol camp, there are more syrians and iraqis, but there are also reports of the Danish and Swedish nationals in the camp.

In november last year the Danish authorities have informed that there is about 12 adult Danish citizens in the camps of al-Hol and al-Roj in northern Syria.

It also sits around 30 children, if the parents are Danish citizens or have been Danish nationals.

Jaber Mustafa, a leader in the camp, indicating that you strongly need help, and that the current assistance from aid agencies "is not enough" to deal with "the great suffering" among the camp's residents.

Medicine and food are the two biggest needs, he adds.