15 women and children drowned in the shipwreck

at Least 15 women and children have drowned and 50 others missing after a shipwreck on Tuesday off the southern Bangladesh. Almost 140 rohingya refugees were 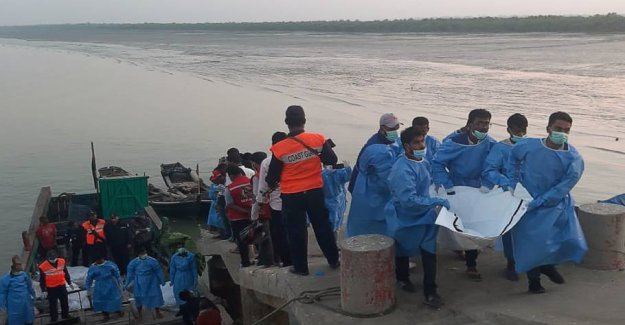 at Least 15 women and children have drowned and 50 others missing after a shipwreck on Tuesday off the southern Bangladesh.

Almost 140 rohingya refugees were on board of a trawler, who tried to cross The Bay of Bengal to reach Malaysia.

There were mainly women and children on board, writes AFP.

- It sank because it was crowded. The boat was designed to carry a maximum of 50 persons. The vessel was also loaded with some cargo, " says Hamidul Islam, spokesman for the coast guard in Bangladesh.

71 persons have been rescued out of the water. Including 46 women.

the 11 women and four children are confirmed to have died.

the Rohingya refugees is being escorted by the coast guards. Photo: STR/Ritzau Scanpix

the Mother Anwara Begum says that two of her sons, who were six and seven years, perished in the tragedy.

Nearly one million rohingya living in camps in Bangladesh near the border with Myanmar. Many have fled from the neighboring country, after the military in Myanmar in 2017 crackdown on the population.

With little prospect of finding work in the camps or to get an education thousands have tried to reach other countries, such as Malaysia and Thailand to embark on the often dangerous voyage of 2000 miles.