15 children died in a fire in Haiti

A true tragedy has unfolded in an orphanage in Port-au-Prince in Haiti, where a fire has taken the lives of 15 children. It was stated by a local judge Friday 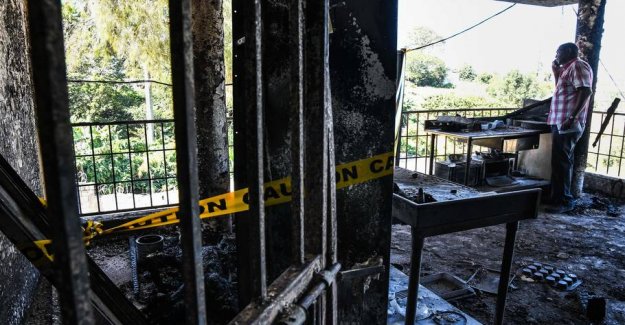 A true tragedy has unfolded in an orphanage in Port-au-Prince in Haiti, where a fire has taken the lives of 15 children.

It was stated by a local judge Friday.

Earlier told news agency AP that 13 children had died in the fire.

Rose-Marie Louis, who daily worked at the orphanage, tells the news agency that she saw 13 children being carried out of the ruins.

the Information is being backed up by the nurse at the nearest hospital Marie-Sonia Chery, who says that 13 children had died. There are both boys and girls among the dead.

There are reports that the orphanage has been defaulted. Photo: Chandan Khanna/Ritzau Scanpix

According to the staff at the orphanage, came the fire department only an hour and a half after the fire was started. Therefore, it was not much that stood to save.

so far, counting on the authorities that the fire was started by candles, as the orphanage has been forced to use since their generator has been in pieces.

According to the redningsarbejder Jean-Francois Robenty the children could have been saved if the emergency services had been better equipped.

- They could have been saved. We simply did not have the right equipment to be able to get in there, he says.

the Deaths could have been avoided if the rescue workers had had the right equipment. Photo: Chandan Khanna/Ritzau Scanpix

Since 2013, the christian organization behind the orphanage not had permission to drive it.

It is the organization the Church of Bible Understanding, which is based in Pennsylvania in the UNITED states, who runs this orphanage and another one, also located in Haiti.

There are about 754 orphanage in Haiti. Of those, only about 50, which has a license or is in the process of getting a license from the authorities.