- I didn't think my dad was something special

16. in may 1948, the Danish James Bond villain Jesper Christensen to the world, and the post-war period left its clear mark on his upbringing. It told the act 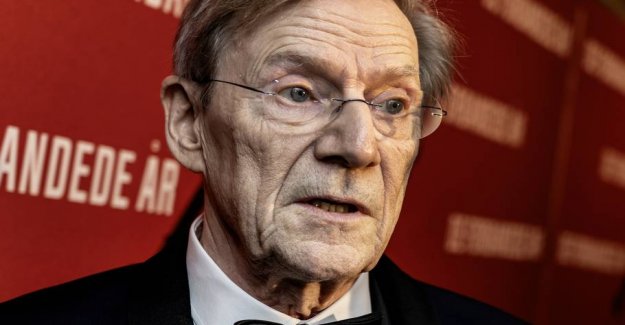 16. in may 1948, the Danish James Bond villain Jesper Christensen to the world, and the post-war period left its clear mark on his upbringing.

It told the actor on the red carpet for the movie premiere of the new Danish films of The 'cursed year', in which he himself plays the starring role.

- Occupation was great if you were a boy in the 50's, I should say. It was very important in the play, for there was played something. It was not so fat, if not one's father had been one of them with the armband, sten submachine gun and strange stålhjelm, says Jesper Christensen.

And it was my father, so I didn't think that my father was anything, before I was an adult, and it dawned on me that it also is pretty cool to have founded a people-to-people Interaction, and have made relief efforts in Poland in the middle of winter.

Some of the friends ' fathers could showcase the armband and the strange stålhjelm, but as a child in the 50's lived in a rygtetid. And they were many.

- There was always so much gossip, and you didn't know what was true. There were always stories about that, and they were nazis. It was all possible, and it was something that took a lot, he explains.

Jesper Christensen, with Bodil Jørgensen and director Anders Refn for the movie premiere of 'The damned year'. Photo: Henning Hjorth
An okay guy
71-year-old Jesper Christensen explains that he has always loved history and read a lot. Therefore, was also exciting to delve into the Second world War, which he did in connection with The 'cursed year' - a film which he is very happy with the outcome of the.

- I think that a movie like this has taken properly for the substance, and not just thought that there had to be some heroes and villains, and then run it. You look at how it was, if you were a man during the occupation. It is clear that there was someone who was not affected so much, but there were many, who got in trouble, he says.

Although he plays the role of Karl Forest. A successful businessman, who collaborates with the germans in order to preserve his fortune and status in society.

- Him, I play, I think, is a very okay guy, he's trying to make it as good as he possibly can, there is no evil in him, and yet it gets worse and worse, as you can see in the film, says Jesper Christensen.

He has immediately not some fixed plans for 2020, but he hopes - just like Bodil Jørgensen, who is also featured in the film - that of The 'cursed year' will get a sequel.

- No, I have no plans with less, we need to do more of it here. Otherwise there is just something that I haven't written on, he concludes.