WINNIPEG, Manitoba -- Jason Zucker was relieved he could salvage a win for his team after a performance he didn't think was very good.Zucker scored with 2:10 left in the third period to lift the Minnesota Wild over the Winnipeg Jets 6-5 on Tuesday night.Erik... 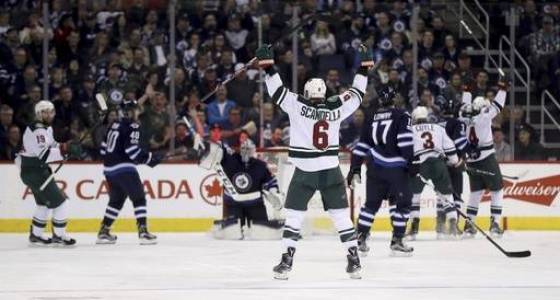 WINNIPEG, Manitoba -- Jason Zucker was relieved he could salvage a win for his team after a performance he didn't think was very good.

Zucker scored with 2:10 left in the third period to lift the Minnesota Wild over the Winnipeg Jets 6-5 on Tuesday night.

Erik Haula set up Zucker's 20th goal of the season by racing after a loose puck and sending a backhand pass across the slot. Zucker scored right as a Winnipeg power play ended.

"That was pretty impressive," Zucker said of Haula's feed. "Backhand, no-look through two guys. It was an unbelievable pass."

That was about the best thing he could say about the game, other than the two points the Wild picked up on the heels of beating the Los Angeles Kings the night before.

The Wild led 4-1 and 5-2 in the second period and had a 5-3 lead heading into the third period, but Winnipeg's Joel Armia and Mark Scheifele tied it with goals less than two minutes apart.

"We had that game and we gave it back to them, let them back into the game too many times," Zucker said.

Scheifele and Mathieu Perreault each had a goal and two assists for Winnipeg.

"Every game matters so much now," Scheifele said. "To lose it in the last two minutes is tough."

Both teams replaced their starting goalies.

Minnesota's Darcy Kuemper allowed five goals on 29 shots and was yanked after Scheifele's 26th goal of the season that made it 5-5.

"I didn't want to pull him after that fourth goal, but once the fifth goal came, he was pretty rattled," Wild coach Bruce Boudreau said. "I didn't know if he'd be able to withstand the rest of the game, so that's the reason we pulled him."

Winnipeg began a six-game homestand after riding a five-game point streak (3-0-2) into its league-mandated break.

Laine scored at 1:02 of the first after Scheifele sent a pass out front to him from the corner, and the Finn put it over Kuemper's blocker side.

Two minutes later, Granlund took advantage of a Winnipeg turnover and went in alone on Hellebuyck for his 21st goal of the season.

Granlund's backhand pass from his knees at the side of the net set up Graovac's goal at 14:19 for a 2-1 lead.

Haula netted his 13th goal on the power play when his shot from the side of the net bounced off Hellebuyck's arm and into the net at 18:42.

Scandella and Lowry traded goals in the first 10 minutes of the second period. White then used a turnover to make it 5-2 at 13:19, sending Hellebuyck to the bench. Perreault squeezed the gap at 17:37.

Armia's short-handed goal came off a weird bounce. Kuemper deflected the shot with his stick, but it went off the glass, hit Kuemper in the back and dropped into the net at 9:35.

Winnipeg had two power plays late in the third but couldn't capitalize.

NOTES: Wild forwards Jason Pominville and Zach Parise missed a second game after being quarantined for the mumps. ... Jets players were offered booster shots for the mumps after the game. Shots had also been available last October.

Wild: Travel to Columbus for a game Thursday night.