TAMPA — When Ellie Pleune finished as the runnerup in last year's Publix Gasparilla Distance Classic 5K by 19 seconds, she wasn't satisfied with her result.1 Week Ago2 Days Ago2 Days AgoIf anything, it drove her for more.In the year following that race,... 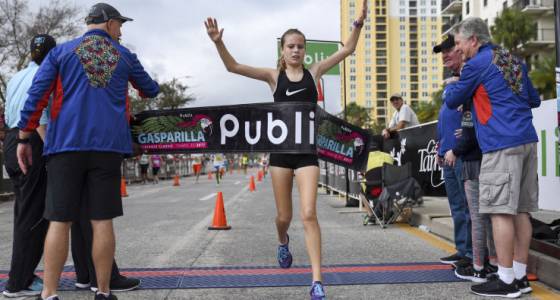 TAMPA — When Ellie Pleune finished as the runnerup in last year's Publix Gasparilla Distance Classic 5K by 19 seconds, she wasn't satisfied with her result.

If anything, it drove her for more.

In the year following that race, the 13-year-old Pleune went to work to assure she would have her best shot to stand alone as the winner. Through an assortment of distance drills and other workouts, putting anywhere from 20 to 30 miles on her soles in a four- or five-day span each week, she prepared as hard as ever.

On Saturday, with the sun beginning to peek through morning clouds like a spotlight on her path toward the finish line, Pleune's drive paid off. She scampered down the final stretch of Bayshore Boulevard concrete to her first victory in three tries in 18 minutes, 16 seconds over 14-year-old Lydia Friedman (18:25).

"It's pretty good, considering I got second place last year," said Pleune, an eighth-grader at Benito Middle School in Tampa. "I put in a lot of training to get here."

Pleune's overall time bested her speed from last year (18:45) by 29 seconds, and her 2015 mark — a ninth-place finish — by a minute-and-a-half. Tarpon Springs' Kailand Cosgrove, who bested Pleune last year, finished sixth at 18:55.

"It means a lot to me," said Pleune, who will compete next in the 8K on Sunday. "I definitely wanted to get first."

On the men's side, Robinson High alumnus Jack Rogers — now running competitively at the University of Florida — won in 15 minutes, 33 seconds — a personal best.

Tampa's John Weaver, 21, was in a dead heat with Rogers in much of the final meters before finishing second at 15:35. Nicholas Buliga of New Port Richey was third at 15:46.

Race officials said 14,000 participated in the 5K. Rogers, who finished third last year behind two UF teammates, said he mostly came down for the workout. The win was a nice bonus.

"I'm not really a distance guy, so that's why they got a little ahead of me in the middle of the race there," he said. "But near the end, I usually have more turnover speed than other guys and I just caught him at the end. … I'm happy with it."