The York Region District School Board has dismissed its director of education. J. Philip Parappally is no longer at the helm of the province’s third largest board, according to an internal memo obtained by the Star, that was sent to all staff Wednesday... 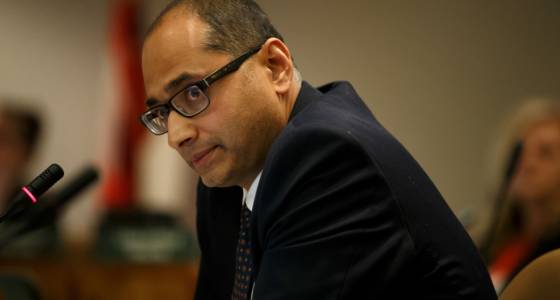 The York Region District School Board has dismissed its director of education.

J. Philip Parappally is no longer at the helm of the province’s third largest board, according to an internal memo obtained by the Star, that was sent to all staff Wednesday morning — a week after trustees passed a unanimous motion to begin the “laborious and complex” process to dismiss him with cause.

On Tuesday, trustees dealt with the personnel matter in a private meeting that ran late into the night, leaving parents and staff wondering about the outcome.

But the memo put some of their questions to rest.

“York Region District School Board announced today they will be seeking a new director of education,” says that memo, issued just as a board-wide equity symposium was underway.

“We wish to acknowledge Mr. Parappally’s 17 years of service with our board and wish him the very best on the next chapter of his life,” said Chair Loralea Carruthers in the memo.

“In the interest of ensuring the education of students is not affected during this time, the YRDSB has already begun its search for an interim director,” she said, adding the board will be working with the Ministry of Education to determine the best candidate.

In the short term, the role will be filled by Associate Director Leslie Johnstone.

A report released last week — ordered by Education Minister Mitzie Hunter after a number of complaints about the York Region District School Board — was highly critical of Parappally’s lack of leadership as well as his relationship with some staff and trustees, and also his conduct with parents.

Hunter had directed trustees to review Parappally’s unprecedented 10-year contract — in Ontario, directors typically sign for four or five years — as well as a job-for-life guarantee as a senior staffer at the end. Hunter also called for an independent, thorough performance appraisal by the end of May, as well as asking the board to create a better hiring and job performance appraisal process for the position.

Carruthers said the board wanted to take immediate action.

“The YRDSB trustees together publicly promised to make positive and immediate changes,” she said in an exclusive interview with the Star. “We wish the former director the very best. He worked at YRDSB for many years. But the report to the minister made clear that the board needed to make a change.

“I said at our first meeting after the report that our obligation was to make things better for parents and our staff — and, most of all, for our kids. And we intend to do that. We will do that.”

She would not discuss any details about Parappally’s dismissal, including the terms.

But Parappally’s contract, a copy of which was obtained by the Star, says he can be fired for cause, with no notice and no pay. The board of trustees also has the right, “in its absolute discretion, for any reason,” to let him go with a year’s salary.

In the report by the provincial reviewers, the most scathing assessment was of the director. They found most senior staff they spoke with had little confidence in him, and said he’d fostered a “culture of mistrust.” Some even reported that he had asked them to spy on one another.

They also said their computers were confiscated to find the source of emails highly critical of him and the controversial process that led to him being hired.

Overall, the reviewers said the board was “suffering from damaged relationships, low morale, mistrust and a lack of strong, principled leadership” and that many felt Parappally’s hiring was “the cause of, and the beginning of, much of the difficulty the school board is currently facing.”

A day after the report was released, trustees voted unanimously, in private, to “dismiss him,” but sources told the Star he left the room before they could hand him his pink slip.

Senior staff told the Star they had not seen Parappally since the meeting last Wednesday and that he hadn’t responded to emails, calls or texts over the long weekend.

Johnstone, who will be at the helm of the board temporarily, caused controversy last year among principals after she and another senior staffer demanded principals intercept mail from a parent coalition sent to all school/parent councils — ordering them to send the document, “including the envelope it arrived in,” to head office.

After hearing from the Ontario Principals’ Council, which had been bombarded with questions and complaints from members, the board backed down two days later.