NORTH HOLLYWOOD >> The dispatcher’s voice had crackled through police radios across Los Angeles: “Shots fired … AK-47 … there’s an officer down.”She’d been a voice of calm 20 years ago today during 44... 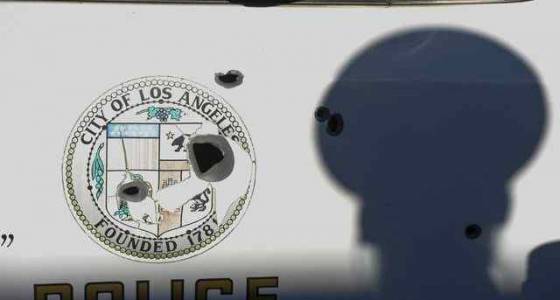 NORTH HOLLYWOOD >> The dispatcher’s voice had crackled through police radios across Los Angeles: “Shots fired … AK-47 … there’s an officer down.”

She’d been a voice of calm 20 years ago today during 44 minutes of abject terror. Once again, she was heard at 9:17 a.m. during a tribute to those who had risked their lives during the North Hollywood shootout — one of the longest gun battles in police history.

“And with that series of broadcasts to that chaos and initial terror began an incident that ended with a true demonstration of the character of this organization that we call the Los Angeles Police Department — a demonstration of valor,” said Capt. Donald Graham, commander of the North Hollywood Division.

He was among an estimated 200 city officials, cops and residents to gather during a one-hour ceremony at North Hollywood Police Station to recognize the outgunned police who overcame men with machine guns.

• PHOTOS: North Hollywood shootout 20th anniversary — a look at the past and present

For it was on Feb. 28, 1997 that two men, each clad in 40-pounds of body armor, stormed a Bank of America armed with automatic weapons and thousands of armor-piercing bullets.

During the botched hold-up, they sprayed more than 1,100 rounds into businesses, homes and cars along Laurel Canyon Boulevard in a televised gun battle that would stun the nation.

They were met by up to 750 rounds fired by police.

When the siege of North Hollywood officially ended at 10:01 a.m., 11 police officers, six bystanders and a dog lay wounded.

Bank robbers Larry Eugene Phillips Jr., 26, and Emil Dechebal Matasareanu, 30, each hit by by at least 10 gunshots each, either shot themselves or bled to death from their wounds.

The shootout transformed a San Fernando Valley still basking in a postwar innocence celebrated on “The Brady Bunch.”

“Twenty years ago, life changed,” said Mayor Eric Garcetti, a self-professed Valley boy. “It felt safe, secure … you could go out and be with friends and it would be all right.

“Something happened that not only transformed the LAPD, but transformed law enforcement nationwide,” he said. “The officers on-scene were outgunned, but they stepped up. They never retreated. They never backed off. They kept the people of North Hollywood and this city safe.”

• RELATED STORY: How the North Hollywood shootout unfolded 20 years ago

As a result of the shooting, the LAPD and other police agencies beefed up arsenals and tactics to better respond to military-style assaults. They also enacted gun control measures, including Los Angeles’ ban on high-capacity magazines.

As a result of the bravery of Los Angeles police officers seen by overhead news choppers, the LAPD overcame a once-sterling reputation marred during the ‘90s by the Rodney King beating, the Los Angeles riots, the O.J. Simpson trial and the Rampart scandal.

Nineteen Los Angeles police officers would be awarded medals of valor. Many residents would be issued courageous citizen awards.

It was “the day willpower defeated firepower,” officials said.

• RELATED STORY: 20 years after the North Hollywood shootout, echoes of the terror remain

The 20th anniversary tribute to the North Hollywood shootout served as a reunion for first-responders from LAPD veterans and dispatchers to Los Angeles firefighters and other police and federal agencies.

Many had their photos taken by an LAPD black-and-white, taken from an exhibit at the Los Angeles Police Museum, still riddled with bullets from the gun battle.

“Look at the bullets in this car — amazing,” said former LAPD Officer and Councilman Dennis Zine. “Some of the bullets are small; some are huge. The LAPD dodged a huge bullet.”

• VIDEO: A photographer who captured the North Hollywood shootout revisits the scene

Retired Sgt. Harry Rosenfeld, wearing a North Hollywood shootout T-shirt, recalled going into the now-defunct B&B Gun Shop to grab a high-powered AR-15 and ammo. He had told his partner, an ex-Navy Seal, ‘Hey, I’ve never shot one of these. How do I do it?” he recalled.

Tonja Bellard, one of the police dispatchers that day, looked at a photo album brought by Dr. Jorge O. Montes, a dentist issued an award for treating two wounded police officers in the thick of battle.

“It was the most incredible day in my life,” said Bellard, whose voice belied calm during the shootout. “I don’t think I could have been more scared. I’m so thankful to see all these beautiful people today.