LOS ANGELES — A special announcement is planned for today at the historic Angels Flight railway, which has been closed since one of the two rail cars came off the tracks in September 2013.Mayor Eric Garcetti and Councilman Jose Huizar are scheduled... 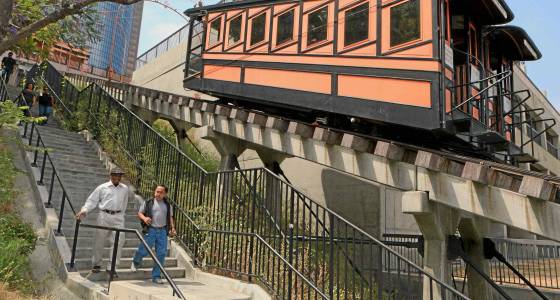 LOS ANGELES — A special announcement is planned for today at the historic Angels Flight railway, which has been closed since one of the two rail cars came off the tracks in September 2013.

Mayor Eric Garcetti and Councilman Jose Huizar are scheduled to attend the 12:30 p.m. announcement at the bottom of Angels Flight, which was featured in a scene in the Oscar-nominated movie musical “La La Land.”

There was no response to emails sent late Tuesday to aides to Garcetti and Huizar seeking details about the announcement.

The Metro Board of Directors approved a motion by Garcetti in 2015 to study ways to re-open Angels Flight, which travels a short distance along Bunker Hill in downtown Los Angeles.

Angels Flight is a “very important part of our transportation system” and fills “a special place in the hearts of Angelenos,” Garcetti said at the July 23, 2015, meeting when the motion was approved.

There were six people riding the funicular when it had its most recent accident, but none were injured. A National Transportation Safety Board report released a month later indicated that railway operators had been using a tree branch for months to bypass a safety feature on the railcar.

The nonprofit Angels Flight Railway owns Angels Flight’s equipment, including its tracks and cars, and has a ground lease that allows it to operate the funicular, according to its president, Hal Bastian. He said federal officials and the California Public Utilities Commission were requiring Angels Flight’s operators to build a walkway next to the tracks before operations can resume.

Col. J.W. Eddy first opened a funicular rail up Bunker Hill on Dec. 31, 1901, when rides cost a penny. It was dismantled and put into storage in 1969 because of the Bunker Hill urban renewal project, then rebuilt and reopened in 1996, a half-block south of the original site.

In 2001, an accident that killed one person and seriously injured seven others prompted another closure that lasted nine years. Angels Flight reopened in 2010, in time for the railway’s celebration of its 110th anniversary on New Year’s Eve 2010.

The CPUC shut it down for almost a month in June 2012 when inspectors found that a wheel part that holds the cars on the track, the flange, had been worn down to a thickness that was unsafe on three of eight wheels.

The funicular re-opened July 5, 2012, after the operator installed all new wheels made of harder steel. When it most recently was in operation, the railway still used its original cars from 1901, named Olivet and Sinai.