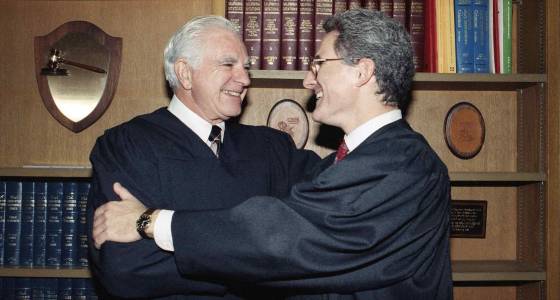 LOS ANGELES >> Joseph Wapner, a retired Los Angeles County judge who gained national fame as a syndicated TV jurist, died today, according to TMZ.com. He was 97.

The retired Los Angeles County judge is credited with changing television with his role on the long-running syndicated TV show, “The People’s Court.”

TMZ reported that Wapner was ill, and had been taken from a hospital to home, to pass away, on Friday.

After retiring from the bench in 1979, Wapner agreed to move to television.

“He was the perfect choice to kick off this genre,” Harvey Levin, the show’s host, legal consultant and co-executive producer, said in 2009, when Wapner was given a star on the Hollywood Walk Of Fame.

Los Angeles County Supervisor Zev Yaroslavsky praised Wapner for teaching “a whole generation or two of young people what it’s like to be in a courtroom.”

“One of them was my son,” said Yaroslavsky, a longtime friend of Wapner who shared an office with his wife Mickey when they worked for George McGovern’s 1972 presidential campaign.

“My son grew up watching `The People’s Court.’ He was so intrigued by it, he decided he wanted to be a lawyer, I’m sorry to say, and he did. He’s practicing law here in Los Angeles, largely because of the experience of how you handled the courtroom.”

Wapner was a Los Angeles County Superior Court judge when his tennis partner and fellow jurist, Christian E. Markey Jr., recommended him to Edwards to preside over the show.

Technically the cases were binding arbitration, but the small claims cases heard on the syndicated series were real. Both sides were told in advance that a small pot of the producers’ money would be allocated to the litigants, based on the judge’s decision.

During his acceptance speech, Wapner recalled meeting with Billett for three hours on a Friday afternoon, and presiding over his first “People’s Court” case the following Monday.

“The plaintiff was a young African-American woman about 5 feet tall,” Wapner said. “The defendant was about 6-7, weighed 250. As I swore them in, he walked toward her with his fist clenched. I said `Uh-oh, you better sit down sir’ and he did.”

Wapner received the star three days before his 90th birthday and one day before an episode of “The People’s Court” airs where he returns to preside over what was described as “a special case” in honor of his 90th birthday.

Receiving the star “is the culmination of a long career,” he said. “It’s something I always thought about, but never thought I would accomplish,” Wapner told City News Service after the ceremony.

A 1989 poll conducted for The Washington Post found that 54 percent of the 1,005 randomly selected adults could identify Wapner as the judge on “The People’s Court,” while 9 percent knew that William H. Rehnquist was then the chief justice of the United States.

“Judge Wapner has more influence on people’s lives than any of the Supreme Court justices you could mention and if you look back in time, really just about anybody in the law,” Levin said.

“He really touched a chord with people and had a huge impact on having people understand something that was very mysterious. What he did was just a gigantic enduring feat.”

Born Nov. 15, 1919, in Los Angeles, Wapner graduated from Hollywood High School in 1937 and received a bachelor’s degree in philosophy from USC in 1941.

Wapner served in the U.S. Army during World War II, rising to the rank of first lieutenant and earning three Battle Stars, the Bronze Star for Bravery and a Purple Heart.

Wapner received a law degree from USC in 1948 and entered private practice the next year.

Wapner’s fame from “The People’s Court” led to his speaking at Harvard Law School and Yale University.

Wapner also gained a measure of immortality from references in the 1988 best picture Oscar winner “Rain Man,” whose title character Raymond Babbitt (Dustin Hoffman) was addicted to “The People’s Court.”

“Ten minutes to Wapner” became a trademark line from the film.

Wapner his survived by his wife of 70 years, Mickey, and three children. Services were not announced.