TAMPA — As Stephanie Bruce crossed the finish line in Sunday's Publix Gasparilla Distance Classic half-marathon she dropped to her knees, dry-heaving, on the Bayshore Boulevard asphalt.1 Day Ago3 Days Ago28 Minutes AgoRace officials rushed to her assistance.... 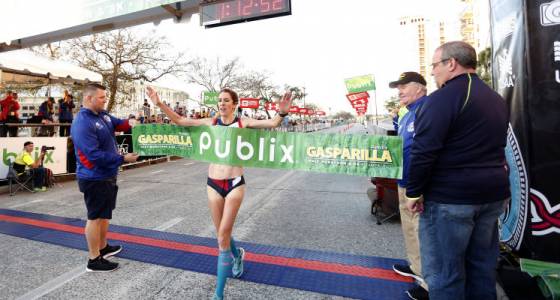 TAMPA — As Stephanie Bruce crossed the finish line in Sunday's Publix Gasparilla Distance Classic half-marathon she dropped to her knees, dry-heaving, on the Bayshore Boulevard asphalt.

Race officials rushed to her assistance. She waved them off.

This is not unusual. Bruce, 33, who won the women's title in one hour, 12.53 minutes, said this happens after every race, the product of having two children.

"It looks dramatic and I hate being dramatic," said Bruce, who is from Flagstaff, Ariz. "I don't know. It just happens. I just need people to give me a minute and I'm good."

The topic of post-pregnancy symptoms is something Bruce does not shy away from. Last year, she posted pictures of her postpartum stomach to her Instagram account.

"You just have to keep it real," Bruce said. "A lot of times people think pro runners or pro athletes are not human and we can just come back from babies and get right back into competition, but there's a lot of stuff along the way so I just tried to share it."

The response was beyond what Bruce could have imagined. The photos went viral, with many women reaching out to her about their own experiences.

"Oh my gosh it was crazy with all these moms that were out there," Bruce said. "It was so cool that we could share pretty similar experiences, and there thousands, millions of women out there that deal with the same stuff that I'm dealing with."

The former University of California, Santa Barbara standout was on the fast track to become an Olympic qualifier in the marathon.

Then came the birth of her first son more than three years ago and her second a little more than a year ago. After taking time off, Bruce was determined to return as if she had never left. Last year, she qualified for the Olympic Trials six months after giving birth.

She finished 20th among 24 competitors, well behind the top three qualifiers who ran for the U.S. Olympic Team in Rio this past summer.

After the trials, Bruce took time off to heal.

In September, she resumed training. Bruce logged more than 100 miles a week in preparation for the California International Marathon two months ago. She was second among female competitors.

In March, she will represent the United States at the World Cross Country Championships in Uganda.

"The Gasparilla has been an iconic race for 30 years, and something I've always wanted to be a part of," Bruce said. "When you get to the top level it's so hard to win races. When you're able to put it together on that day, you're just so thankful for the people that have gotten you here."