LONDON—Even as he was preparing for the biggest struggle of his life, leading Britain in its fight against Nazi Germany, Winston Churchill had something else on his mind: extraterrestrials.In a newly unearthed essay sent to his publisher on Oct. 16,... 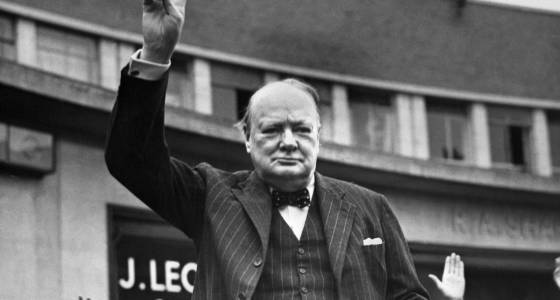 LONDON—Even as he was preparing for the biggest struggle of his life, leading Britain in its fight against Nazi Germany, Winston Churchill had something else on his mind: extraterrestrials.

In a newly unearthed essay sent to his publisher on Oct. 16, 1939 — just weeks after Britain entered World War II and Churchill became part of the wartime Cabinet — and later revised, he was pondering the likelihood of life on other planets.

Churchill, who went on to become prime minister during much of World War II and again from 1951 to 1955, was so enthralled by the subject that he even ordered a suspected sighting of an unidentified flying object by the Royal Air Force to be kept a secret for 50 years to avoid “mass panic.”

In an 11-page essay titled “Are We Alone in the Universe?” the statesman showed powers of reason “like a scientist,” said Mario Livio, an astrophysicist who read the rarely seen draft and wrote about it in an article published recently in Nature magazine.

“The most amazing thing is that he started this essay when Europe was on the brink of war and there he is, musing about a question about a scientific topic that is really a question out of curiosity,” he said in an interview.

Churchill first defines what life is, then details the requirements for life to exist and progressively expands his reasoning to the existence of life in other solar systems, Livio said. “He’s really thinking about this,’’ Livio said, “and though he didn’t have all the knowledge at hand, he thinks about this with the logic of a scientist.”

Churchill’s interest in science stemmed from his early years as an army officer in British-ruled India, where he had crates of books, including Darwin’s “On the Origin of Species,” shipped to him by his mother.

He later became friends, at least for a time, with the writer H.G. Wells, whose hugely popular “The War of the Worlds,” about Martians invading Britain, was broadcast in 1938 — a year before Churchill wrote his article. (Churchill once said Wells’ “The Time Machine” was one of the books he would like to take with him to purgatory.)

Churchill argued that it was probable that extraterrestrial life existed somewhere in the universe. This was years before Frank Drake, the U.S. astronomer and astrophysicist, presented in 1961 his theory about the number of communicative civilizations in the cosmos. “It is astonishing that Churchill wasn’t a scientist and yet he showed such an interest in science,” Livio said.

The manuscript was passed on to the National Churchill Museum in Fulton, Missouri, the site of Churchill’s famed 1946 Iron Curtain speech, in the 1980s by Wendy Reves, the wife of Churchill’s publisher, Emery Reves. It had been overlooked for years until Timothy Riley, who became the museum’s director last year, stumbled upon it recently. Soon after news of the discovery, two other copies were found in a separate archive in Britain.

Although the article was sent to Reves in 1939, it was not published. Churchill had revised it a number of times in the 1950s.

Largely self-educated in the sciences, Churchill had boundless curiosity for practically anything, an attitude he once described as “picking up a few things as I went along.”

He wrote about 30 million words in his lifetime, including wartime speeches, an African travelogue, a book on oil painting, a lengthy memoir, and even an essay on an imagined invasion of Russia when he was just 15. For his body of work, he won the Nobel Prize for Literature in 1953.

Welding an active imagination with scientific thought, Churchill produced a few madcap ideas — which he called “funnies” — that he actually championed while he was prime minister, as a means to defeat Nazi Germany.

There was Operation Habakkuk, an imagined fleet of aircraft carriers made from wood pulp and ice to fight German U-boats in the mid-Atlantic. Then there was the Great Panjandrum, an enormous, rocket-propelled wheel packed with explosives. Churchill even invented a green velvet “siren suit” to be put on in a hurry during air raids.

While none of these ideas came into being (the giant wheel having run amok in the testing stage), science was not just a hobby for Churchill.

He was the first prime minister to hire a science adviser. Frederick Lindemann, a physicist, became Churchill’s “on tap” expert and once described him as a “scientist who had missed his vocation,” said Andrew Nahum, who curated an exhibition on Churchill and science at the Science Museum in London.

Churchill also met regularly with scientists such as Bernard Lovell, the father of radio astronomy and the Lovell telescope.

“Churchill presided over a culture that encouraged technological development,” Nahum said. He had such a genuine interest in science, he added, that as chancellor of the Exchequer in prewar Britain, he complained to a friend of having to draft the budget instead of reading a book on quantum physics.

During World War I, when he was lord of the admiralty and later secretary of state for air and war, he encouraged military aviation, chemical warfare and tanks. During World War II, which he called in his memoirs “The Wizard War,” he supported the development of radar, rockets and Britain’s nuclear program.

Churchill founded in 1958 the British equivalent of the Massachusetts Institute of Technology at Cambridge — Churchill College — which has since produced 32 Nobel Prize winners.

In the interwar period, Churchill wrote numerous scientific articles, including one called “Death Rays” and another titled “Are there Men on the Moon?” In 1924, he published a text asking readers “Shall We All Commit Suicide?”, in which he speculated that technological advances could lead to the creation of a small bomb that was powerful enough to destroy an entire town.

Churchill had a “natural curiosity and general optimism about life,” Riley said. He had “a willingness to see technical and scientific advances improve not only his immediate world or his country, but the world.”