There are two types of coaches in this world: those who dance after a big win and those who don’t.Richard Pitino isn’t a dancer. He wasn’t about to try and top Miami (Fla.) coach Jim Larranaga, whose moves were so awkward after beating Virginia... 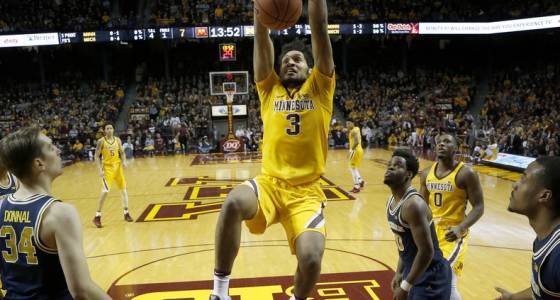 There are two types of coaches in this world: those who dance after a big win and those who don’t.

Richard Pitino isn’t a dancer. He wasn’t about to try and top Miami (Fla.) coach Jim Larranaga, whose moves were so awkward after beating Virginia this week that the video went viral.

Pitino didn’t know he was being videotaped after the Gophers’ 89-75 victory Wednesday at No. 24 Maryland, but his speech was a hit on social media as well.

The fourth-year Gophers coach told players they were now talking about “seeds” in the NCAA tournament and not talking about whether they would make it.

“I didn’t know the camera was in the locker room,” Pitino said. “Luckily, I didn’t swear.”

The Gophers (21-7, 9-6 Big Ten) have moved past aspirations of just reaching the program’s first NCAA tournament in four years. A six-game conference winning streak, the program’s longest since the 1996-97 Final Four season, has made them in apparent lock for an at-large bid. Carlos Gonzalez, Star Tribune Jordan Murphy (3) dunked the ball in the first half against Michigan.

CBSSports.com bracket expert Jerry Palm said there should be “no doubt in anyone’s mind.”

The Gophers can finish no worse than 9-9 in conference and has both a RPI and strength of schedule ranking in the top 20 in the nation.

So the résumé is solid with enough quality victories and no really bad losses. Pitino knows this, so he refocused his team’s goals to seeding in March — both for the Big Ten tournament and NCAA tournament.

“It’s an accomplishment we’re proud of and we’re excited about,” Pitino said of the likelihood of making his first NCAA tournament as a head coach. “But we’ve got a lot of season left and a lot of opportunities in front of us. It’s nice that we don’t have to play under the cloud of bubble talk, this and that. But with that being said, there are still things that we can be playing for.”

What avenging an earlier loss to Penn State would do Saturday for the Gophers is get them a step closer to earning a top-five NCAA seed and top-four seed and double bye in the Big Ten tournament, which is being held March 8-12 in Washington, D.C.

The Nittany Lions (14-14, 6-9) might end up playing on the first day of the conference tourney. If everything works in the Gophers’ favor — realistically — they wouldn’t have to play until Friday’s quarterfinals. Then, if they won three games in three days, they would be Big Ten tournament champions for the first time.

“The goal is to win the tournament,” Pitino said. So if you can find a way to get a double bye, it puts you in a great spot.”

If the rest of the Big Ten regular season plays out with favored teams winning, the Gophers would finish in fourth place at 11-7. That means winning at least two of their last three games, most likely against Penn State and Nebraska at home. The Big Ten finale at Wisconsin will be tough, considering Minnesota hasn’t won in Madison since 2009.

Michigan State swept the Gophers this season and owns the tiebreaker if both teams finish with the same conference record. But the Spartans have a tougher last three games, including against Wisconsin and Maryland.

Looking ahead is something the Gophers can’t afford to do, though. They already lost to Penn State 52-50 on Jan. 14 in State College, Pa. It was their biggest collapse of the season, going from up 10 at halftime on Penn State to being completely outplayed down the stretch.

The Gophers had 20 turnovers that night and shot 28 percent in the second half.

More than a month later, though, the Gophers are playing their best basketball at the right time. A year ago, they were 8-20 and 2-14 in conference at this point. There was really nothing to play for but pride — and now it’s about seeding.

“It’s an amazing feeling,” sophomore forward Jordan Murphy said. “Because where we were last year was in a dark place. It just gives you a lot of confidence and a lot of optimism about where we can be.”