Michael RibaudoWilloughby police  WILLOUGHBY, Ohio -- The man accused of kidnapping three family members and holding them in a Willoughby basement told court officials that his $1 million bond was "ridiculous" and that his actions were "not out of... 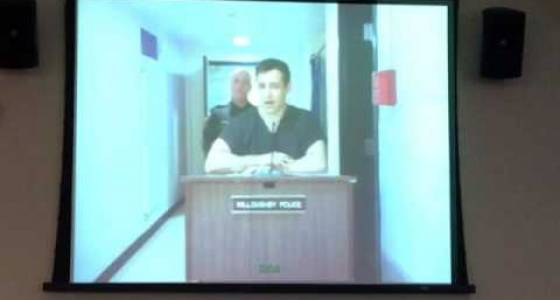 WILLOUGHBY, Ohio -- The man accused of kidnapping three family members and holding them in a Willoughby basement told court officials that his $1 million bond was "ridiculous" and that his actions were "not out of anger."

Michael Ribaudo, 34, is charged with three counts of kidnappings in a Friday incident at his father's house on Green Circle in Willoughby. The Cleveland resident is accused of kidnapping his father, mother and aunt and binding them in the basement, police said.

Ribaudo, who remains in custody at the Willoughby Police Department, appeared by video Monday in Willoughby Municipal Court. He is scheduled to appear in court Thursday for a preliminary hearing.

Ribaudo appeared nonplussed when he was told of his $1 million bond. He also said he could not pay it.

"It seem ridiculous, but I suppose you guys don't really have any of the facts," he said during the hearing. "You don't have my circumstances."

Ribaudo did not elaborate, aside from saying, "it's not out of some anger, or something like that."

Ribaudo said in court that he is a teaching assistant at Cleveland State University, where he is working toward a Ph.D. A university spokesman was not immediately available for comment.

His aunt told a police dispatcher that he is schizophrenic and might have been suicidal that evening, according to a 911 recording released Monday by the Willoughby Police Department. Officials did not address any mental health issues during Ribaudo's court appearance.

"He tied us all up with handcuffs. He's schizophrenic," the aunt says in the recording.

Ribaudo planned to dine at his father's house Friday night. He instead lured the 72-year-old father into the basement, assaulted him with chloroform and bound him, police said Saturday in a news release.

Ribaudo then went to his 65-year-old mother's house in Willoughby and convinced her to come to the father's house. He attacked her when she arrived and handcuffed her to a post in the basement, police said.

He went to his 59-year-old aunt's house in Willowick and took her to his father's home. Ribaudo attacked the aunt and handcuffed her to the same basement post, police said.

The aunt managed to escape and called 911 after Ribaudo left the house, police said. Paramedics treated the victims for injuries to their arms and legs.

Police found Ribaudo sleeping in his 2007 Chevrolet HHR about 4 a.m. in an Eastlake parking lot. He was arrested and taken to the Willoughby Police Department for questioning.