Will tea-party-style opposition work for anti-Trump groups like Indivisible?

A grassroots movement of fired-up citizens demands resistance to the White House and shifts Washington’s balance of power along the way.It worked for the tea party. Now President Donald Trump’s opponents hope the same tactics bring them similar... 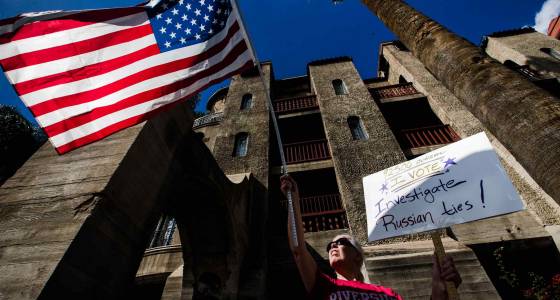 A grassroots movement of fired-up citizens demands resistance to the White House and shifts Washington’s balance of power along the way.

It worked for the tea party.

Armed with a playbook on civic engagement, the Indivisible movement has inspired a deluge of phone calls, letters and emails to members of Congress in Southern California and nationwide, urging them to protect the Affordable Care Act and oppose rollbacks of environmental laws and other Republican priorities.

Those messages have fueled protests in many House Republicans’ backyards. Sign-waving protesters greeted Rep. Ken Calvert, R-Corona, on at least two recent occasions, including a campaign fundraiser Wednesday, Feb. 22, at the Mission Inn in Riverside.

Trump critics throughout the country are pressuring House members to hold town hall meetings. Republicans who hold the meetings often face overflow crowds and sharply worded questions, especially about Obamacare. In some cases, lawmakers cut their town-hall meetings short or left through side doors to avoid public wrath.

Pictures of Republicans like Calvert who aren’t holding town-hall meetings end up on fliers captioned “Missing.” The face of Rep. Paul Cook, R-Yucca Valley, appeared on the sides of milk jugs in his district.

It’s a flashback to 2009 and 2010, when Obamacare opponents angrily confronted congressional Democrats at town hall meetings. Then as now, lawmakers blamed the protests on out-of-district agitators.

With the help of conservative groups like FreedomWorks, the tea party is credited with helping the GOP gain control of Congress, blocking parts of President Barack Obama’s agenda and nurturing the populism that led to Trump’s surprise win over Hillary Clinton.

Boosting their cause is a groundswell of anti-Trump sentiment that spurred millions to attend women’s marches the day after Trump’s inauguration. The same backlash inspired protests at airports following Trump’s executive order barring citizens of seven predominantly Muslim countries from entering the United States.

John Berry, a cabinet member of the Redlands Tea Party Patriots, said he’s amused that progressives are copying tea party tactics after denouncing the tea party as racist. “It’s the same old activists wearing a new hat,” he said. “This is a center-right country. The Democrats and liberals are a patchwork of divergent interests. That’s why it will never work.”

One of the leading anti-Trump movements is a coalition of groups known collectively as “Indivisible.”

Marcia Godwin, an associate professor of public administration at the University of La Verne, described Indivisible as “a warp speed, super-sized version of the tea party movement.”

“It took until the summer after Obama’s inauguration for district-level protests to hit congressional offices and we are only a month into the Trump administration,” Godwin said. “The success of the women’s march and the continuing rise of social media have sparked a wider and quicker response.”

Former Democratic congressional staffers set the foundation for Indivisible, according to published reports.

“There was this overwhelming cry from different groups of people about not knowing what steps to take in order to fight,” Sarah Dohl, an Indivisible board member and a former communications director for a Democratic congressman from Texas, told CNN. “We thought we could help.”

“Indivisible: A Practical Guide for Resisting the Trump Agenda” is free and available online. Today, there are 7,000 Indivisible-linked groups in all 50 states, CNN reported.

The 26-page guide offers step-by-step instructions for communicating with members of Congress while admiring the tea party’s effectiveness and blasting its motives.

“If a small minority in the tea party could stop President Obama, then we the majority can stop a petty tyrant named Trump,” the Indivisible guide read.

Indivisible is in Republican and Democratic congressional districts. The chapter in California’s 42nd Congressional District, which Calvert represents, is called “Indivisible 42.”

Julia Peacock, one of Indivisible 42’s more vocal members, lives in Calvert’s district. A registered Democrat who spoke to Mission Inn protesters, Peacock said she took it for granted that Clinton would win and watched election night results in horror.

“After I stopped crying and feeling like I was going to die, I decided to get active,” said Peacock, who teaches high school in Perris.

Indivisible 42 is nonpartisan and its members include Democrats, Republicans and independents, Peacock said, adding the goal isn’t to unseat Calvert, who represents a Riverside County district with a plurality of GOP voters and is the Inland Empire’s longest-serving congressman with more than 20 years in office.

That said, “the fallout of our activism could very well end in candidates who will take him on (in 2018),” she added.

On a Facebook Live video recorded at the Mission Inn protest, Peacock said she “brazenly announced that I’m running for Congress against Ken Calvert.” Peacock could not be reached for comment to clarify her remarks.

Calvert, who won re-election last November with 59 percent of the vote, hasn’t held a town hall meeting since 2009, according to Indivisible 42. Calvert’s spokesman disputes that.

Indivisible 42 visited Calvert’s Corona district office at least twice this month. In one instance, Calvert’s staff met with some from the group as more people waited outside.

In an emailed statement, Calvert said while he didn’t think Indivisible’s members are paid activists, “I do believe they are following the playbook written by the national Indivisible organization, which is organized by (House Minority Leader) Nancy Pelosi loyalists in Washington, D.C.”

“Let’s be clear, the people who have protested my meetings in the district as well as my office and called for a town hall want me to take my marching orders from Nancy Pelosi and follow her liberal agenda,” he said. “However, that’s not the agenda I campaigned on or was elected to support, so the bottom line is that’s simply not going to happen — period.

“The reality is these Nancy Pelosi supporters want to yell and scream at me at a town hall and that’s not going to solve our nation’s problems,” Calvert added.

“Instead, I’m meeting with people who aren’t interested in political stunts and shoving a camera in my face, but in sitting down and discussing the complicated challenges facing our country — including how to replace the failed Obamacare with a system that works better for Americans.”

If Calvert is so confident in his support, he shouldn’t object to a public forum with his constituents, Peacock said. “If (a town hall) does get loud, it won’t be because we’re not reasonable human beings,” she said. “It will be because he’s not answering questions.”

Academic observers say it’s too early to tell whether Indivisible and groups like it can repeat the tea party’s success.

“Right now, this (anti-Trump) movement is about everything,” said Dan Schnur, a political scientist at the University of Southern California. “And at a certain point in the not-too-distant future, they’re going to have to decide … they can’t just be a no-Trump movement. They’re going to have to establish a more specific set of policy priorities.”

The movement’s future depends on a sustained level of passion and money for logistical support, said Shaun Bowler, a distinguished professor of political science at UC Riverside.

“The thing is, we are not quite sure what it takes to move from something temporary to something more permanent,” he said. “The move from protest to organization is not an easy one and not one that just happens.”

How Trump enacts his policies, not just the policies themselves, may give the resistance momentum, Bowler added.

It’s also unclear whether, like the tea party, the resistance goes after Democrats deemed to be too soft on Trump. Thanks to the tea party, many congressional Republicans fear a challenge from within more than a Democratic opponent.

The anti-Trump movement might have a harder time recruiting followers than the tea party, said Patrick Miller, an assistant professor of political science at the University of Kansas.

“Any new movement on the left faces the challenge of mobilizing a group of people who are not just politically more diverse but also demographically,” Miller said. “So that can impair the success on the left now as compared to what we saw under the tea party.”

“But if activists on the left can mobilize and coordinate people to become involved in politics at the grassroots level and vote at higher rates despite any challenges, then they can see some success going forward.”